Michelle Wie “finally” won her first LPGA Tour event last weekend, shooting a 3-under 69 in the final round of the Lorena Ochoa Invitational in Mexico. After a stellar amateur career that saw her qualify for a USGA event as a 10-year-old, it took the now-20-year-old more than five years to notch her first victory on tour.

“It’s a huge monkey off my back. A huge gorilla, really. I didn’t think I would cry but I did. It was everything I expected and more. I’m really proud of myself for not giving up and pushing through. It has been so long overdue,” said Wie.

But that’s not to say it’s been a quiet couple of years for Wie. Since turning pro a week before her 16th birthday, she’s battled the high expectations her early success brought, signed endorsement deals worth millions, and famously competed in several PGA Tour events against an all-male field. But with this win over established contender Paula Creamer, Wie and her fans may finally be able to focus on her performance and less on the distractions and hiccups she’s encountered so far.

Other golf fans remain skeptical and are quick to point out that one win, while certainly a milestone worth celebrating, does not guarantee that the worst is behind her. This Caveman is quick to recall Anna Kornikova, another famous female athlete who sizzled on red carpets and magazine covers while cashing big endorsement checks but failed to play her sport at a championship level.

My take? There are a lot of 20-year-old golfers who haven’t won so much as a Nassau on a golf course yet, let alone a professional event. If she stays healthy, keeps working and doesn’t get distracted, Michelle Wie can still become an elite-level golfer – but it’s going to be up to her to put in the work. Here’s hoping her next tour victory doesn’t take another 60+ tries!

PS: Lookin’ for more about Michelle Wie? Get just the facts at Wikipedia or check out some of her glamour shots, then leave a comment here or on Twitter! 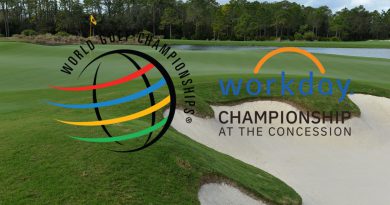