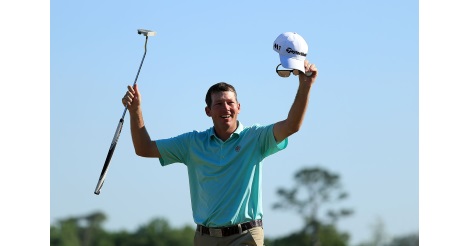 1. Jim Herman’s win at Shell Houston Open punched him a ticket to The Masters. Herman finished one stroke ahead of Henrik Stenson after chipping in for birdie on the 16th hole and holding on for the win. Ranked 191st in the world, this was Herman’s first career victory in 105 starts – and it couldn’t have come at a better time. See you next weekend, Jim.

What a moment for Jim Herman.

A chip-in on the 70th hole en route to his first career PGA TOUR win.#ShotOfTheDay https://t.co/p7DvOc0AyG

2. Tiger won’t play in this year’s Masters. Tiger Woods announced he is officially withdrawing from the 2016 Masters. The announcement left fans wondering when they would see Tiger back on the links. Woods’ manager announced that he anticipates a return before the end of 2016.

I’ve been dedicated to my rehab and improving daily, but I’m not physically ready to compete in the Masters. https://t.co/vbrv5xXISu

3. Miguel Angel Jimenez shoots a 64 to win third Champions title. Jimenez locked down his third PGA Tour Champions win on Sunday at the Mississippi Gulf Classic. He shot a 64 overall on Sunday, this after trailing on Friday and Saturday. He has only appeared in 10 PGA tournaments.

How will Tiger Fare At the Masters?

What’s The Worst Golf Shot You Have Taken?

Who’s In At The Open Championship?