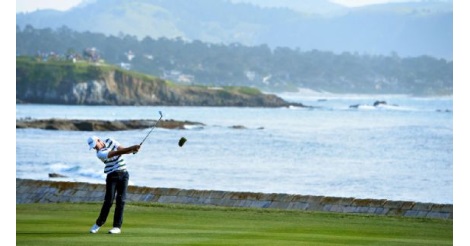 1. Vaughn Taylor gets his first PGA Tour win since 2005. His career has not gone without obstacles, but a final round of 65 earned Taylor a victory at the AT&T Pebble Beach Pro-Am on Sunday. He played 234 PGA Tour events between his previous win and this one, which would be his third overall PGA Tour victory. Taylor was 4-under on the final six holes of the day to defeat a lingering Phil Mickelson. Mickelson finished one stroke back.

Safe to say @VaughnTaylorPGA will hold on to this picture forever. pic.twitter.com/X0UsPxI0Rm

2. Charl Schwartzel earns his second title of the season on European Tour. Schwartzel cruised to victory at the Tshwane Open in South Africa on Sunday. This was his eighth European Tour win on South African soil. Schwartzel began the day with just a one-stroke lead, but turned it on after a birdie on the second hole and wound up winning by an 8-stroke advantage.

3. Bernhard Langer wins his 26th PGA Champions Tour title. Fifty-eight year old German golf legend Bernhard Langer snagged his win this weekend at the Chubb Classic by three strokes finishing at 15-under par. He stayed one over par during most of the tournament until hitting birdie on the 11th to pull him ahead. Fred Couples finished second at 12-under par.

Bill Murray with the classic club toss at the 7th @attproam during hole-in-one charity pic.twitter.com/7crYNEuV6I