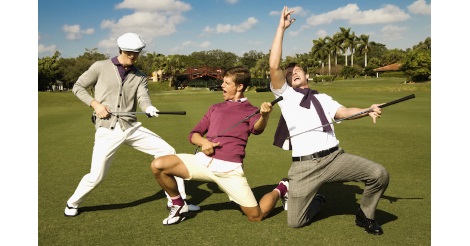 Every industry is trying to court those millennial dollars, and golf is no different. The question is will millennials want to change their increasingly casual lifestyles to play this traditional sport or will golf have to change for them?

Some answers may come from Steve Mona, CEO of the World Golf Foundation, who was in San Diego last week for U.S. Golf Association’s annual meeting. Though there are 25 million golfers in American (and that number’s been the same for the last 4 years), Mona indicated his desire to shift the industry’s focus to drawing in millennials.

Tod Leonard reports for the San Diego Union Tribune on the plan Steve Mona has for the state of the game.

They key segments to all of golf are youth and the millennials, which the NGF deems as those between 18 and 34 years old. The NGF did a comprehensive study of millennials and found that six million are currently playing and contributing about $5 billion annually to the golf industry. Another 12 million millennials expressed interest in taking up the game at some point.

“This kind of sky-is-falling talk that millennials aren’t playing the game, the facts belie that,” Mona said. “It would be disingenuous of me to say, though, that there aren’t issues to address.”

The NGF study reported that millennials value the tenets of the game as much as their older peers, but are turned off by perceptions of stodginess or lack of acceptance. Among the areas that need to be addressed, Mona said, are dress codes, use of technology on the course and even the use of music while playing.

“There are courses that already are reshaping their whole experience to be extremely millennial-friendly,” Mona said. “There are others who haven’t so much. But if you talk to any operator who is paying attention to the business, most of them will tell you they are making adjustments to appeal to the millennial audience.

“They’re the next group coming along, and they’re going to be the core.”

In my humble caveman opinion, Mona seems to want to change the traditional trappings of golf to draw in more players and “grow the game.” He points to the $5 billion that millennials contribute to the industry as proof of their interest. However, the industry is worth around $70 billion; millennials contribute less than 15% of that! Should the whole game change to suit that 14-15% in hope that that number increases? I would hope not.

I’m also skeptical about the idea that millennials will always want those changes. If a golfer isn’t raised with the game, he usually starts playing later in life. In 20 years, will those millennials still want to wear t-shirts on the course or will they want the game look and feel like the one their parents’ played? People tend to grow more conservative and traditional as they age; by the time millennials are in their 40’s, and at their peak purchasing power, I truly believe that they won’t want the changes that Mona speaks of.

I understand that Mona is looking out for the longevity of the industry and the game. In order for there to be golf in this country, there needs to be golfers. I must assume that Mona is looking at the popularity of Topgolf (the one golf brand that is growing with millennials) and wants to find a way to bring that growth to the traditional golf industry. However, I think that he misses the reasons why Topgolf is so popular with that demographic. It’s not the lack of dress code or use of music, it’s the novelty of playing a game with your friends without any time or financial commitment to improving your skills in that game. You don’t have to buy expensive golf clubs or pay for a country club fee to play Topgolf. It’s financially accessible to millennials. If Steve Mona really wants to grow the game of golf, maybe he should focus less on changing the traditions of the game and more on changing the cost.

3 thoughts on “Does Golf Need To Change To Grow?”