Even though this here caveman doesn’t have a crystal ball, that ain’t stoppin’ me from making a few predictions when it comes to this week’s golf tournament – the British Open. Let’s take a look at some of the forerunners of the latest big golfing match accordin’ to the Bleacher Report!

Mickelson is a good player to bet on for this here tournament. Much like the noble postman, this player keeps workin’ hard even in bad conditions. Whether in rain or wind or slick grounds, Mickelson’s chipping game is gonna come in handy this week. Though 2012 hasn’t been particularly kind for Mickelson so far, this is definitely the moment for him to turn it around.

Though he may be past his prime, you should still never bet against (arguably) the best in the biz. Though he hasn’t won a major so far this year, he has come out on top in a number of competitions. Since the start of his career, Woods has won three times at the British Open (the last one in 2006). He knows what it takes to win this one, so don’t count him out just yet!

Followin’ his Masters victory, Watson ain’t exactly been bringin’ home the bacon. He finished 18th at the Zurich Classic of New Orleans and missed the cut at both the Memorial Tournament and U.S. Open. That being said, he has a tremendous swing and a great attitude – both of which’ll be important this week at the British Open.

Though we’ll have to wait to get our answer ’til the weekend’s over, that won’t stop a true Rockhead from offerin’ up a little speculation! Got your own pick for who’s gonna come out on top at the British Open? Leave your thoughts in the comment section!

Tee It Up Preview-Genesis Open 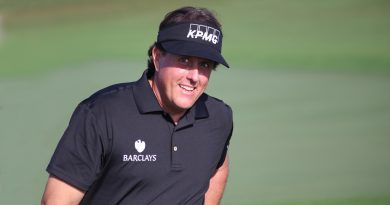