Okay, so the golf season is over. It was a memorable year what with the bet between Rory McIlroy and his dad’s that he’d win a Major, another European Ryder Cup victory, and Billy Horschel’s FedEx Cup win and the drama that played out with him almost missing the birth of his daughter for $10 million. So now what?

Luckily in this world of vast communication we can keep up with our favorite golfers even when we don’t see them every Sunday on television. Ever wonder what they do with their weekends when they aren’t on tour? What about around the holidays? Where do they vacation? Who says the most outlandish things? Well, I’ve done my research and will now present to you the list of golfers you should be following on Twitter and why.

Stewart Cink has the gift of tweeting. His witty one liners fit perfectly in the necessary 140-characters. From tweeting pictures of the sandwiches he made for him and his wife to live-tweeting tournaments, Cink’s tweeting might just be better than his golf game.

I love oysters but eating them is a little like playing craps. Excitement, followed by a slimy feeling, then a lot of your money is gone.

Ian Poulter may have gained some of his 1.76 million Twitter followers when he whined about Baba-Booey but he kept them for other reasons. Poulter is one confident guy. He brags and boasts and gives it back on his Twitter feed, playing the villain quite well. Plus, he’s always talking about himself, his fancy cars, and his huge house. You love to hate him.

Ok it's time to get rid of the comb over look. It's now pissing me off now. Back to the old Poulter.

It’s only fair to give Rory McIlroy a shout out when it comes to his Twitter feed. The kid was born in the era of social media and he sure knows how to use it. One quick scroll down his page and you’ll see plenty of pictures, selfies, and videos… and they all come right from him. Not some public relations guy. His is in touch with all 2.16 million of his followers. You can follow him @McIlroyRory.

Surprisingly (or maybe not!), the man himself, John Daly has quite the handle on his social media. Although he is not in the millions like some in the younger crowd, Daly’s Twitter feed is an honest roundup of his daily doings. His use of hashtags reminds me of the way my dear old grandpa might use them: so wrong, but so endearing.

Another guy to find on Twitter is Bubba Watson. If you want to know what it’s like to live like a professional golfer, Bubba’s the guy to follow. He tweets pictures from his plane rides, selfies of him and his wife, the view from NFL games he attends and comments on his golf game all the time. Plus, he’s friends with the guys from Duck Dynasty which is just cool.

Can anyone find Phil in this photo? #PhotoBomb pic.twitter.com/H9WmOGxCCa

Of course we all have our favorites and the content of each golfer’s tweet could really mean less than nothing to you. Well what about the numbers? Who do you think has the most Twitter followers?

Not surprisingly, Tiger Woods leads the list with 4.6 million followers… and counting. He may have had his fair share of public relations disaster, but this just intrigues the sports fans more. He is pretty reserved and smart on Twitter these days. Promoting himself and his foundation. But the guy’s a legend, so of course he has the most Twitter followers, too!

Now not everything on social media is pretty. We have seen our fair share of melt downs, too. With one click of the mouse, Ian Poulter brought the Baba Booey craze back to life and last year Lee Westwood took to Twitter to talk crap to his haters after failing to win another title. After calling out the “trolls” and “minions” he concluded his 11 tweet rant with “Not been hacked. Just honest. Bored now. Westy out!” Six hours later he also tweeted an apology to his sponsors and “true followers.” True followers or not, his rant got people talking and he now boasts 731,000 followers.

Twitter can be a blessing or a curse, as can any social media platform. As we say goodbye to the 2014 golf season and hello to the long winter months, we can be thankful to know that our favorite golfers are still communicating to us. Whether they rant, brag, or are overly grateful, we know we can find them on our Twitter feeds.

Tiger Woods Climbing Back on Top 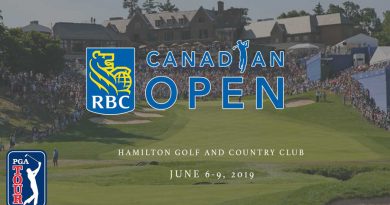