So by now, we’ve all heard the news, for the first time since 1995, Tiger Woods will not be competing in this year’s Masters Tournament. But don’t be discouraged! Whether or not you’re a Tiger fan, this year’s Masters looks to be as exciting as previous years.  Here’s Scratch’s Top 3 Reasons To Be Excited About The 2014 Masters!

1. The field is WIDE open

This season has so far seen one crucial difference from previous years: a dominant player. Rory McIlroy mentioned Wednesday that men’s golf is a wide open as it’s ever been during his time as a pro. “It’s almost like golf is waiting for someone to stamp their authority on the game and be that dominant player,” McIlroy said. Consider this: Adam Scott, Henrik Stenson, Phil Mickelson and Rory McIlroy are winless. The last 20 PGA Tour events have turned out 17 different winners. Only two of the top-10 current players in the world have won a PGA Tour event at all this season!

Tiger’s back isn’t the only injury changing up the game this year. Phil Mickelson withdrew last week due to a pulled oblique; Jason Day’s having pain in his left thumb, and Hunter Mahan is also having back problems. That’s another three of the usual suspects who are now questionable. If Day wasn’t injured, he would have been the Cave crew’s top pick; hopefully his time will come soon. At the moment, we’re cautiously getting behind Adam Scott; he’s the second best bet on the bookmakers list behind McIlroy.

For years now, we’ve heard the same complaint: Why do they only cover Tiger’s group?! Without him, get ready for more hours of players we don’t get to see enough of like Jordan Spieth, Dustin Johnson, and Thorbjorn Olesen. And don’t forget the previous two Masters champs Scott and Bubba Watson. Surely, TV execs and advertisers will be missing the Tiger Woods ratings bump, but the rest of us viewers surely won’t miss hearing once again that, “Tiger’s on the hunt.”

There’s a reason everyone gushes about the grounds of Augusta National. You’ll find images of Amen Corner on living room walls, desktop screens, shirts, even cell phone cases! There is something magical in those cypress trees and azaleas; it’s no wonder Augusta is one of the most beautiful courses in the world. Even if you don’t ever get the chance to walk the greens, it’s a true pleasure every year to see that little slice of heaven on our televisions.

Check out ESPN’s analysis of the field of golfers!

What are you most excited about Rock Heads? Let me know in the comments below! 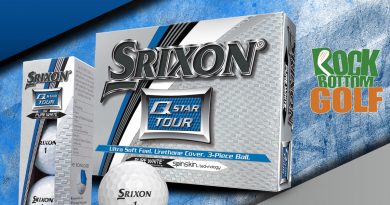 Golf Club Advice Golfing News Product of the Week Scratch's Shots Of The Week Sweet Deals At The Rock!

Hey Rock Heads we just added the ability to customize your clubs to our site! So not only will you