Remember a couple of months ago when in an article by Sports Illustrated, Vijay Singh admitted to using deer antler spray, a banned substance? Well, after weeks and weeks, the PGA has decided to drop its case against him.

Why? Well, here’s where it gets interesting. By admitting he used the deer antler spray, Singh violated the tour’s rules. How? The tour only conducts random urine tests and there is no test available in routine blood testing.

“According to Section One of the PGA Tour Anti-Doping Program Manual, a player is strictly liable whenever a prohibited substance is in his body, regardless of the circumstances.

Because Singh did not test positive for the banned substance, according to Section Two (D) (8) titled PGA Tour Anti-Doping Program, Prohibited Conduct, Singh’s verbal admission was treated as a positive test.”
So by his admission, Vijay had violated the PGA Tour’s Anti-Doping Program. But if he’s guilty, why did they drop the case? After Singh was found guilty, he appealed to the World Anti-Doping Agency which then cleared him.

They cleared him because the substance he was using has no effect. Days after the SI story broke, doctors were saying that deer antler spray doesn’t work. It’s supposed to provide the user with the growth hormone IGF-1. But IGF-1 cannot be delivered orally(Singh said he’d spray it under his tongue). IGF-1 is a hormone that mimics insulin and has to be injected to have an effect(like insulin). So Singh was getting as much from the deer antler spray as he would from water.

If any golfer in the future tests positive for IGF-1, they’ll be suspended(remember Singh had no positive tests). But as Tim Finchem said, “it’s not possible” to get enough IGF-1 from deer antler spray to register a positive test. If Singh is guilty of anything, it’s being dumb.

What’s The Difference Between Recycled And Refinished Golf Balls? 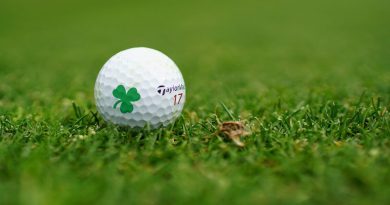 Get Geared Up For St. Patrick’s Day!