The 15th week of Caveman Golf Trivia has come to a close. Thank you all for playing! For those Rock Heads who are scorin’ at home, here are all the questions and their answers:

What is the highest (elevation) golf course in the world?
La Paz Golf Club, in Bolivia

What is the Northern Most Golf Course?
North Cape, Norway

What is the Southern Most Golf Course?
Ushuaia Golf Course, Argentina

What is the coldest golf course in the United States?
North Star golf Club, Alaska

Who holds the LPGA’s record score in 72 holes in relation to par?
Karen Stupples

Who holds the PGA’s record of lowest score over 72 holes?
Ernie Els

Who holds the LPGA record for lowest raw score over 72 holes?
Karen Stupples

Who holds the PGA record for lowest raw score over 72 holes?
Tommy Armour

Who holes the LPGA record for most money won in a single season?
Lorena Ochoa

Who holds the record for most pro tournament wins on the LPGA?
Kathey Whitworth

Who holds the LPGA record for most wins in a single season?
Mickey Wright

Who holds the LPGA record for most career Majors won?
Patty Berg

Who was the youngest LPGA golfer to reach $1 million in career earnings?
Paula Creamer

Who was the first LPGA golfer to reach $1 million in career earnings?
Kathy Whitworth

Which LPGA golfer holds the record for fastest to win when starting her pro career?
Beverly Hanson

Who was the youngest winner on the LPGA tour?
Marlene Hagge

Who was the youngest player to compete in an LPGA Event?
Bevery Klass

Who was the oldest player to compete in an LPGA Event?
Joanne Carner

Who holds the PGA record for fewest putts in 72 holes?
David Frost

The longest sudden death playoff lasted 11 holes. When was it and who won?
1949 Motor City Open: Cary Middlecoff and Lloyd Mangrum

Which golfer holds the PGA record for most wins in a single year?
Byron Nelson

Which golfer holds the PGA record for second most wins in a year?
Ben Hogan

The record for largest margin of victory is 16 strokes. Which 3 golfers share this record?
J.D Edgar, Joe Kirkwood and Bobby Locke

This week was another close one, but Congrats to Chuckles1974 (twitter) and David Stephens (Facebook) for winning the trivia contests this week. Remember you get 5 points for having the first correct answer, but can also gain points just by having the correct answer! Weekly winners receive $10 gift certificates to RockBottomGolf.com. Mike Melillo was the high scorer on my golfin’ game so he will recieve a $10 gift certificate as well. Congrats Tim!

If I haven’t heard from you yet, why not come & play with me and the rest of the Rock Heads this week? Questions are posted between 2 and 4 pm EST on both Facebook and Twitter. To keep things fair, you can only win once per contest per month. Week 16, however, is a NEW month! 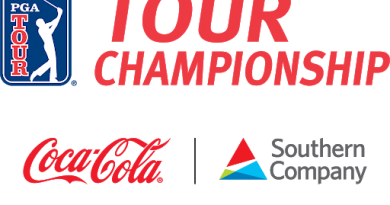