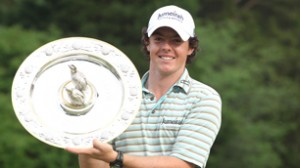 Tiger missed the cut this weekend at the Quail Hollow. He’s missed cuts before and has kept his #1 spot, so what’s all the fuss about?

For starters: Rory McIlroy! Not only does he share the cover of Tiger Woods PGA Tour 11, but just 3 days before his 21st birthday, he became the youngest player on the PGA Tour since Tiger won at Disney in ’96, and set a course record of 62 while doing it. This also marked Rory’s first win on the PGA Tour and boosted him back to 9 in the world rankings.

Next Up: On the other side of the pond, Ryo Ishikawa shot a 58, and at only 18 years old, the future of golf looks astounding.

Lastly: While Phil didn’t win he trotted in at 2nd, gaining points while Tiger has begun to lose them, shrinking the gap even more towards that #1 Spot.

Bonus: According to a recent study, John Daly’s “beer gut” may have been from genetics and not the booze. And that goes for everyone!

Was Pebble Beach TOO Difficult?

One thought on “Has the Take Over Begun?”