More than ten years into his career as a professional golfer, Doug Barron has become a household name. Too bad it’s because he was the first player to fail a PGA Tour drug test! But following the initial announcement, new information has been slow to come to light… until now.

First, it looks like Barron’s going to be sitting idle for a while one way or another. Barron’s lawyers submitted a request in federal court that would have allowed Barron to compete in a qualifying tournament in Houston, but the magistrate denied that motion.

Next was the revelation that Barron had twice asked the PGA for a therapeutic exemption and been denied. It seems Barron has suffered from low testosterone levels and may have had some issues with his heart, both of which required prescriptions for the male hormone testosterone and beta blockers to keep his conditions in check.

Unfortunately for Doug, both of those substances are banned by the PGA because they can increase strength, speed recovery, and reduce nervousness – all obviously able to assist a competitive golfer.

The PGA’s drug policy is matter-of-fact: each golfer is solely responsible for their own body and what substances go into it, so a positive test means a suspension. But now the question seems to be how serious was Barron’s situation, and should the PGA have granted the medical exemption for his prescribed treatment?

Before you make up your mind, let this Caveman cast your mind back to 2001 when certifiably disabled golfer Casey Martin had to fight his way all the way to the US Supreme Court before being allowed to ride in a golf cart. (Martin was diagnosed with a degenerative circulatory disorder of his right leg.) The PGA stood by its statement that using a cart would “fundamentally alter the game,” but the Supreme Court sided with Martin.

No doubt there will be even more evidence to consider in Barron’s case before too long, and this Caveman will do his best to keep you posted!

PS: Since I dusted off the Casey Martin case, I’d love to hear your opinion: Does walking fundamentally change the game of golf? And I wanna know if you walk or ride, especially if you’ve found you play much better doing one versus the other!

BONUS: Should Pros Have To Carry Their Own Clubs? 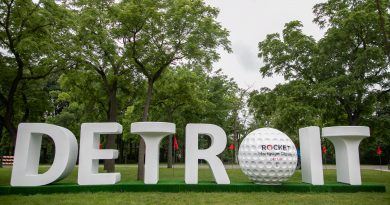 On The Range-Rocket Mortgage Classic

A Classic At Atlanta Athletic!

Rock Head Poll Result! How YOU Think Tiger Will Fare At Augusta