Tiger Woods cruised to a three-shot victory over a weak field at the last-ever Buick Open, and there was even less drama for Fred Funk’s victory at the Senior U.S. Open on Sunday.

Funk started the day one shot ahead of Greg Norman and slowly widened the gap, ending up in front by six shots. Other notables and how they finished: Greg Norman T-4, Mark O’Meara T-6, Tom Watson T-43, Hal Sutton T-49, Dana Quigley T-56.

In Michigan Tiger played well and pretty much walked away with it unchallenged. The biggest story of the week was the implosion of John Daly. His disastrous second round put in him dead last and has him mulling retirement. Personally I’d hate to see him quit after coming back from his personal and legal troubles, but it was painful to see him struggle like that.

Tiger’s third Buick Open win is also the final Buick Open. Sponsor General Motors, who earlier this year cut short their endorsement deal with Tiger himself, has all but said they won’t be able to pony up the money for the event in the future. 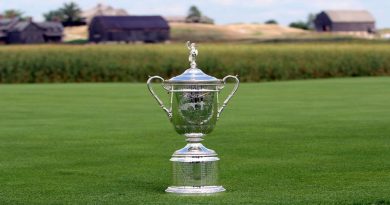 The Top 8 Halloween Costumes For Golfers!