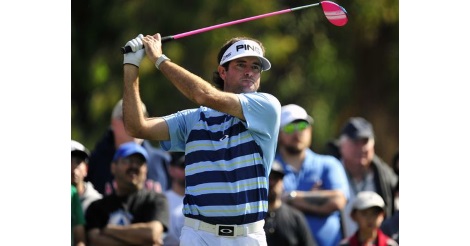 1. Bubba Watson wins at Northern Trust Open after an eventful week. Last Sunday, after missing the cut at Pebble Beach, Watson went to visit a local doctor who told him he had a kidney stone. Just a day later, he passed it, and less than a week after that, he won his second Northern Trust Open title. Watson made two late birdies to take the lead from Australian Adam Scott and American Jason Kokrak, both of whom finished in second place, one stroke behind. What else happened this week for Bubba? He made a cameo appearance on Girl Meets World, his son, Caleb, took drumming lessons from Justin Bieber, and he was able to watch his favorite basketball team, the Golden State Warriors, play live.

2. Marcus Fraser wins first European Tour event since 2010. Fraser finished at 15-under par on Sunday at the Maybank Championship Malaysia, this just his third Tour victory. With the win, Fraser moved to sixth place in points for The Race to Dubai. The win gave Fraser a berth to next month’s WGC – Cadillac Championship. Soomin Lee looked to be the obvious winner, but made two crucial bogeys in the final holes to fall behind and finish tied for second place.

3. Lydia Ko still ranked in the top spot despite finishing second. Ko finished at 13 under at the ISPS Handa Open in Australia this weekend, but it still wasn’t enough. Japanese golfer Haku Nomura took first place, finishing at 16-under par. Instead of charging of the links in disappointment or frustration, Ko came running back out to help Nomura celebrate her win.

4. Tiger Woods’ timetable for return still unclear. Everyone is missing golf’s most recognizable face as we approach the heart of tournament season. His last update in December came after his second back surgery. It stated that he has no timetable for his recovery and return. His caddy has said that Tiger continues to turn down offers from other caddies and that he is confident he will make his return and continue to win. A statement from his publicist said recently there really is no update since December. Fans will continue to wait.

A Win For Mickelson, A Win for Golf, and A Win for Callaway?

How To Spot a Golf Cheat