This week the PGA Tour will be playing the 2018 Memorial Tournament at Muirfield Village Golf Club.

The Memorial has been played at Muirfield since 1976, 2 years after the club was opened. The tournament and course were both created and designed by Jack Nicklaus. Muirfield Golf Village is located in Dublin, Ohio outside of Columbus, where Nicklaus was born and raised. Nicklaus created this event as a way to give back, the primary charitable beneficiary is Nationwide Children’s Hospital. Similar to last week’s Ft. Worth Invitational, this event also holds “invitational” status. This means it hosts a reduced field of players, between 120 – 132. They also have more freedom than traditional events in the sense of determining player eligibility. In June 2014, the PGA Tour granted the winner a 3 year exemption. Six players have won the Memorial multiple times.

Jack Nicklaus founded the club in 1974. The name was based on Muirfield, Scotland, the site of 1 of 3 British Opens won by Nicklaus. The land was acquired in 1966 although construction began 6 years later. Muirfield was officially opened in May of 1974. The property features 2 golf courses, The Country Club at Muirfield and the signature Muirfield Village Golf Club.

The property has hosted several big events through the years, 1986 U.S. Junior Amateur, 1987 Ryder Cup, 1992 U.S. Amateur, 1998 Solheim Cup and the 2013 Presidents Cup. Muirfield joins The Greenbrier in West Virginia as the only 2 places to have hosted both the Ryder and Solheim Cups. Each fall Nicklaus will make changes to Muirfield in order to accommodate new technology, make the course more enjoyable for members and for event spectators. Recently the changes have included lengthening the 1st, 10th, 12th and 17th hole, adding bunkers to the 10th and 17th as well as re routing a stream on the 18th. In 2014 Muirfield Village was ranked 53rd in the Worlds Greatest 100 Golf Courses by Golf Digest.

Looking to watch the 2018 Memorial?

Looking to play like the pros? Look no further! Swing by our website to get geared up for the season! 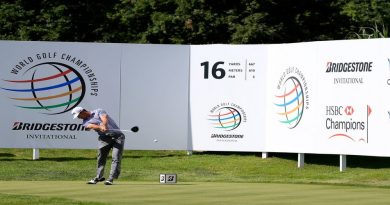 Rickie Fowler Increases His Stock With Win In Abu Dhabi