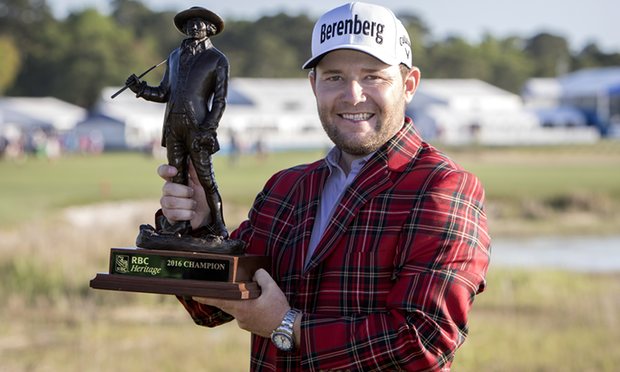 1. Branden Grace gets very first PGA Tour victory. > Branden Grace’s first ever PGA tournament win came at RBC Heritage this weekend. He was ranked 14th in the world coming into the tournament after winning 10 other events worldwide. Grace knocked home enough birdies to beat out Luke Donald and Russell Knox. Grace finished the tournament 9-under-275 with a final round 66.

2. Jason Day shoots highest round of his career at RBC Heritage. Jason Day finished tied for 23rd after shooting a 79 – his worst round in the PGA so far. Despite the misstep, Day remains ranked number one in the world. He follows in the footsteps of Jordan Speith who, when ranked number one last year, also shot a 79 during the tour but recovered quickly – as we all hope Jason will.

3. Andrew Johnston snags his first European Tour victory. The twenty-seven year old Johnston earned the win at the Real Club Valderrama Open de Espana, Hosted by the Sergio Garcia Foundation. Johnston was very excited and says that he is looking forward to celebrating his win with family – but most of all he is looking forward to getting “hammered”. Gotta appreciate the honesty!

4. Tour rookie calls out former Masters champ Mike Weir. There was a little drama in the golf world on Thursday after former Masters champion, Mike Weir, withdrew from the RBC Heritage Tournament after a not-so-good round (78). Rookie, Dawie van der Walt, who was on the tournament waiting list, took to Twitter to complain saying that if he was going to withdrawal he should have not competed altogether and let someone else play. Later he apologized saying it’s nothing about Weir specifically, he just wanted his chance to compete.

David Lingmerth Wins His First, While Tiger Plays His Worst

Jason Day Gets The Win At The 2016 Players Championship!