1.Tiger Woods will play The Masters this weekend. He made the announcement this past Friday by simply saying “It’s obviously very important to me and I want to be there.” This followed a week of speculation from the golf media after Woods dropped out of the top 100 for the first time since 1996. He announced he was taking time off to practice and perfect his game earlier this year, saying he did not want to compete unless it was at the highest level possible. Woods has won The Masters four times in his illustrious career. He missed the tournament last year with a back injury, the only time he didn’t play. Woods added, “I’ve worked a lot on my game and I’m looking forward to competing. I’m excited to get to Augusta and I appreciate everyone’s support.”

I’m playing in the Masters. Thanks for all the support. http://t.co/SYih4eSxUa

2. J.B. Holmes wins Shell Houston Open in playoff. Holmes, tied with Jordan Spieth and Johnson Wagner, finished at 16-under. Spieth led Holmes by six strokes heading into Sunday, but Holmes birdied the first five holes and finished Sunday at 8-under to force the playoff. Spieth has played in the final group and been a top-two finisher in his past three starts and is currently fourth in world rankings and second in the FedEx standings.

3. Bubba Watson talks about his experience at The Masters. Watson sat down with ESPN reporter Scott Van Pelt and discussed how his play matches the course at Augusta, Tiger Woods, and his favorite NBA team. You can see part of the interview on ESPN.com, and a full-length article in the upcoming issue of ESPN the Magazine.

4. Brittany Lincicome is the surprise winner in LPGA playoff. She said heading into the tournament, she was focused on simply making the cut, but a 10-foot eagle putt and three pars boosted Lincicome into the winner’s circle at the ANA Inspiration on Sunday. Lincicome tied it up with Stacey Lewis when she made the eagle putt on 18 and stayed calm through three holes in the playoff to clinch the win just in time– the sun was setting as the women went to what would be the final hole in the playoff. This was Lincicome’s first title in nearly four years.

Wow I have no words 😊. Thank you SO much to @ANAinspiration for making this possible. Thank you for all the wonderful messages ❤️❤️❤️ 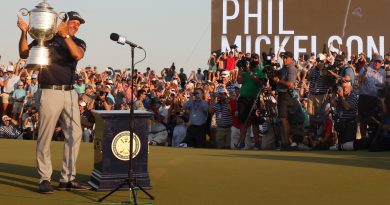