Here in the ol’ U.S. of A., summer is the perfect golfin’ season. Unfortunately, it’s also thunderstorm, season – thunderstorms and golf don’t mix. Other than geese and an errant slice, there’s nothing more dangerous on a golf course than lightning. Course are generally open areas with scattered individual trees – perfect locations for lightning strikes. And don’t forget those metal sticks we’re all carrying. Wise golfers know to leave the course when they hear thunder. However, Scratch here as seen too many posts on the internet that go something like this: “Is it OK to golf during a storm?” 5% of all lightening deaths in the US occur on the golf course so, before summer and the storms start rollin’ in, let’s have a refresher course on golf and lightning safety.

The Golf Course Superintendents Association of America have these tips for avoiding danger when lightning is in the area during your round of golf.

1. Don’t wait until you see lightning to leave. Seek shelter as soon as you hear thunder. And don’t worry about your game. If the course’s warning system sounds, head for cover. The USGA Rules of Golf (Rule 6-8) allow players to discontinue play if they believe there is a danger from lightning.

2. If possible, get off the golf course or go to a designated lightning shelter (note: open-sided buildings do not provide protection from lightning even if they have a lightning rod).

3. Do not stand under a lone tree. This is where most people are injured or killed.

4. Stay away from water. Water is a great conductor of electricity.

5. Stay away from your golf clubs.

6. If your shoes have metal spikes, take them off. You don’t want to be a walking, talking lightning rod.

7. Move away from your golf cart. Golf carts are not a safe shelter option.

8. If stranded in the open, go to a low place such as a ravine or valley. (Note: If you feel a tingling sensation and the hair on your arms stands up, squat in a baseball catcher’s position, balancing on the balls of your feet, feet together, arms in front of your knees. If in a group, members of the group should keep at least 15 feet apart.)

If a player in your group is struck by lightning, the person is no longer carrying any electrical current, so you can apply first aid immediately. The golfer will be burned and have received a severe electrical shock.

People who have been apparently “killed” by lightning can be revived if quick action is taken. If you must make a choice, treat those who are not breathing first — those who are unconscious but still breathing will probably come out of it on their own.

First aid should be rendered to those not breathing within four to six minutes to prevent irrevocable brain damage. Mouth-to mouth resuscitation should be administered once every five seconds to adults and once every three seconds to infants and small children.

However, if the victim is not breathing and has no pulse, cardiopulmonary resuscitation is necessary, but should be administered only by persons with proper training. You should also check for burns along the extremities and around areas in contact with metal, give first aid for shock and then send for help.

1. Each year, about 400 in the U.S. are struck by lightning while playing golf, working outside, at sports events, on the beach, mountain climbing, mowing the lawn or during other outdoor activities. About 80 people are killed and several hundred more are left to cope with permanent disabilities. Finishing a game isn’t work these types of tragedies.

2. All thunderstorms produce lightning and are dangerous. Lightning kills more people each year than tornadoes.

3. Lightning often strikes as far as 10 miles away from any rainfall. Many deaths from lightning occur ahead of the storm because people try and wait to the last minute before seeking shelter.

6. Look for dark cloud bases and increasing wind. Every flash of lightning is dangerous, even the first. Head to safety before that first flash. If you hear thunder, head to safety!

7. Blue Skies and Lightning. Lightning can travel sideways for up to 10 miles. Even when the sky looks blue and clear, be cautious. If you hear thunder, take cover. At least 10% of lightning occurs without visible clouds in the sky.

8. Because they are generally open areas with scattered individual trees, golf courses are dangerous places during a thunderstorm. A lightning bolt will take the shortest route between the cloud and the ground, which means that a golfer standing in the middle of a fairway or huddled under a tree is a prime target for a strike.

Just in case you need another reminder on the dangers of lightning, take a moment to remember Lee Trevino. Trevino was struck by lightning during the 1975 Western Open in Chicago at the height of his career. He and Jerry Heard were huddled under an umbrella on the edge of the 13th green at Butler National, waiting for a quick shower to stop. The skies were sunny and clear when suddenly lightning from a distance thunderstorm streaked sideways across the water and threw Trevino and Heard into the air. The lightning bolt went through Trevino’s bag and up his arm before exiting out his back. The lightning strike caused injuries that led to back surgery and ultimately cut short Trevino’s career.

So Rock Heads, stay safe this summer and don’t mess around with lightning! 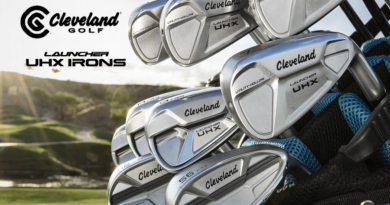 All You Need To Know About Golfer's Elbow

Hey, Rockheads today we’re spotlighting the new Titleist Vokey SM8 Wedges! These wedges were made to allow the average golfer