Sounds like we may start seein’ fire extinguishers at tee boxes. According to a recent New York Times article by Henry Fountain, scientists at University of California, Irvine, have found that titanium clubs can create sparks that burn long and hot enough to start a brush fire .

It all started with two golf course fires in California, including one that burned 25 acres and injured a firefighter in 2010. The fire officials at the Orange County Fire Authority had originally thought the fires were sparked by cigarette butts or cigars. However, Steve Concialdi, a captain at the Authority, says that in both fires, golfers using 3-irons with titanium-alloy heads reported they hit the ground and created sparks that started the fires.

Fire officials had a hard time believing that so they approached the researchers at UCLA. James C. Earthman, a professor of materials science and golfer, started to examine the claims. He already knew that bits of titanium could burn spontaneously when exposed to air.

He and his colleagues set up an experiment with a tee surrounded by embedded rocks. They took swings at the rocks with three titanium clubs and three with stainless steel heads and found that all the titanium clubs created sparks while the steel ones did not. The sparks the titanium clubs produced were definately enough to cause a fire. They burned for over a second, at temperatures high enough to ignite dry plants, and some sparks even flew up to four feet!

“The real danger seemed to be when you had titanium on the sole of the club and on the leading edge,” Earthman said. “The more sparks you have, the further they go and the longer they last, you increase the probability of ignition.”

Captain Concialdi recommends that golfers with titanium clubs in drought stricken areas like California “either take a penalty or, if your fellow golfers will allow you to improve your lie, do it. But do not hit the ball in this type of area.”

Season’s Greetings From The Caveman Crew! 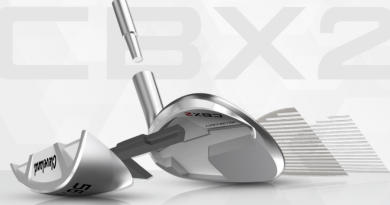