The 2014 PGA Merchandise Show is on and Scratch is here bringing you all the latest news! So far we’ve seen some clubs, lots of new golf balls, and some interesting ways of building the game. Check out the links below for more information!

Titleist Debuts GoLo line Of Putters
The original Scotty Cameron GoLo putter came out three years ago, but on Wednesday Titliest announced that the GoLo has become its own family of putters. All four GoLo models will arrive in mid-April and feature a circular shape and simple alignment systems.

Bridgestone’s True Balance Line Of Putters
GolfWRX calls them “’counter’ counter-balanced putters”. Missing additional weight in the shaft and grip-section, True Balance putters have light shafts and grips that the company says adds more feel to the putter head during the stroke, allowing it to square up more easily at impact.

Callaway X2 Hot “5Deep” Fairway Wood
This wood is designed for golfers who have downward angle of attacks or tend to contact their fairway woods on the upper part of the face.

Titleist’s Four New Golf Balls Promise To Boost Distance And Feel
Get the low down on each model at Golf.com

Bridgestone Updates One Of Their Signature Products – See The New 2014 Tour B330 Golf Balls
Bridgestone says that the inner core is much softer and the outer section is much firmer to reduce spin and increase distance. Four balls have been updated – the Tour B330, Tour B330-S, Tour B330-RX and Tour B330-RXS.

Skechers Introduces Its First Golf Shoe
Remember those sneakers that were big in the late ’90s? Well, Skechers is still around and going strong. Three years after introducing its first athletic shoe, the company is now venturing into the golf market.According to GolfWeek, “The original model, the GoGolf, is wider in the toe area in order for the player to stay on his or her toes and not on the heel. The player is able to grip into the shoe, which will translate into the ground causing better traction during the golf swing.”

Nike Make A McIlroy-Inspired Polo
Just what the market was demanding?

Oakley Factory Lite Carry Bag
Oakley introduces a carry bag that only weighs 2.85 pounds! Read how they did it at Golf Digest.
Taylor Made Creates Line Of Non-Conforming Clubs

And here is possibly both the weirdest and most interesting news for the show so far. Taylor Made has made it clear that they intend to grow the game with their announcement of Hack Golf – “a forum that invites golfers and non-golfers to share ideas and thoughts about what is holding our game back.” Good idea, huh? Let’s figure out the problem and fix it.

Their new line of non-conforming clubs takes it even further. These clubs – a driver, iron, wedge, and putter – are designed to make the game easier to play and get into. GolfDigest describes the clubs saying, “[the golf clubs] are meant to strike a larger-than-normal golf ball, with the end goal of holing the ball inside a 15-inch cup.” Taylor Made says that it has found 100 courses that are willing to install these 15-inch cups on a few of their holes and allow the non-conforming clubs to be used. The holes will still include the traditional 4.25 cup though, don’t worry.

Taylor Made stresses that this is just an experiment. Benoit Vincent, TaylorMade’s Chief Technology Officer, says “We have no idea what this will lead to, but that’s not stopping us from trying it out. The idea is to make golf more fun for more people. Part of the plan is to have people playing only for an hour or 90 minutes at a time, at least at first.”

This new version of the game make anger purists, but it could be used simply as a “starter version” of golf. GolfDigest says, “The obvious idea here is to weaken the learning curve required to play golf well and make the gratification of hitting a good shot more immediate. TaylorMade’s plan is to get the clubs in the hands of the 100 courses that have agreed to allow play, and to have people rent them on a daily basis.”

We here at the Cave think it is an odd idea, but if it gets more people to start playing golf, it has to be a good thing, right? Let me know what you think in the comments, RockHeads! 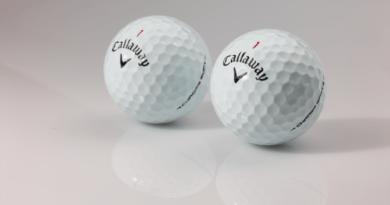 Golf’s Back in the Olympic Games!