Typically, golf had the reputation of being a little behind in the times. Most people see the sport as the stodgy stronghold of rich, older white men. Recently, however, golf has taken a few tentative steps into the modern day by embracing social media like never before.

At the Northern Trust Open this week, TaylorMade sponsored golfers were seen sporting hats embellished with the brand’s official Twitter hashtag, #driverlove. This leaves the door wide open for other brands to jump on the bandwagon and expand their name through social media.

“For our sport as a whole, the social media space has really been a slow-moving river,” says Bob Maggiore, TaylorMade’s chief marketing officer. “So it’s interesting for us, because we’ve kind of given up on doing certain things the old way. We like to get out in front and try different things.”

TaylorMade’s record setting year lends further support for golf’s rise in social media prominence. According to Maggiore, the hashtag has already sparked a modest “cult following” among golfers and fans after less than two days of practice rounds and Pro-Am play at the Northern Trust.

While TaylorMade may be the first golf company to explore Twitter as a means of advertising, players have been encouraged to Tweet on the course for some time. This is a little surprising given how steeped in tradition and etiquette the sport is. When you’re out on the course, even the quietest whisper or daintiest sneeze can be met with looks of shock and scorn. With that in mind, LPGA Tour Commissioner Carolyn Bivens telling Bloomberg that she would like to encourage golfers to use their cell phones and tweet while on the course is a little unusual.

As Bivens explained, she wants golfers to harness the power of social media sites like Twitter and Facebook to engage fans during the rounds and help garner more interest and support for the LPGA. With the economy hitting especially hard these days and sponsors running scarce, public support and interest in the LPGA is crucial.

That being said, there is something a little distasteful about Tweeting during a game. In March, NBA forward Charlie Villaneuva faced the fury of sports and media personalities throughout the country when he sent a tweet from his cell phone during halftime.

There is a certain amount of showmanship and arrogance, in this caveman’s opinion, that goes into Tweeting out on the course. Pausing play to send a quick update to your followers strikes me as disrespectful to both the other players on the course and to the game itself. If the sport is considered “a good walk spoiled,” then Tweeting while on the course could quickly make golf “a good sport spoiled.”

So I leave it to you, Rockheads. When it comes to the course, the question is: to tweet or not to tweet? 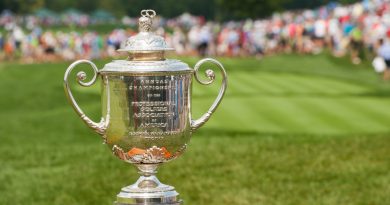 On The Range-2019 PGA Championship

One thought on “To Tweet or Not to Tweet (on the PGA Tour), That is the Question”