As the golfin’ enthusiasts over at Reddit.com put it, this week “seems like the first real tournament of the year.” We’ve got the Farmers Insurance Open starting today and going through Sunday, January 29th to keep us Rock Heads occupied. So let’s take a look at the players we have to look forward to seeing out on the links!

Phil Mickelson’s World Golf Hall of Fame career includes 39 PGA Tour victories – an impressive record that puts him in a tie with Tom Watson and Cary Middlecoff for the ninth best player of all time. As PGATour.com reports, Mickelson “certainly expects to win. If not, I don’t want to say that it’s a failure, but it certainly wouldn’t be what I’m looking for or expect.” For Mickelson, confidence certainly seems to be key, but how will he stack up against competition like Bubba Watson and Brian Davis. Currently, Bubba is ranked highest in scoring average, driving accuracy, and driving distance with Davis holding an impressive putting record. Check out the tournament Thursday through Sunday from 3:00pm to 6:30pm on CBS.

The Farmers Insurance Open isn’t the only tournament to get us fans glued to our TVs. The Abu Dhabi Golf Championship features big names like Tiger Woods, Rory McIlroy, and World #1 Luke Donald. Woods’ first round of the 2012 season saw him post a 2-under at 70 – just three shots behind co-clubhouse leaders Rory, Robert Karlsson and Gareth Maybin. According to USA Today, “Woods played bogey-free golf that produced few momentous shots and two birdies. He missed several birdie chances, including a 6-footer on his ninth, the 18th hole.” Woods admitted he wasn’t playing his best: “I had a hard time reading the greens out there. The greens were pretty grainy and I just had a hard time getting a feel for it. Toward the end I hit some pretty good putts, but overall I got fooled a lot on my reads.”

While Rory put up better numbers overall than Woods, his playing was far less consistent. Good shots balanced out the bad ones, but overall his game was very erratic. He made three birdies in his first four holes, but then managed to bogey the next four. The three birdies on the back nine balanced out him back out, though.

How about it Rock Heads – the golf season is finally starting to heat up! (Now if only the weather would follow along, right?) This caveman can’t wait to see how the early 2012 season ends up playing out. Got your own predictions for the upcoming tournaments? Leave ’em in the comment section! 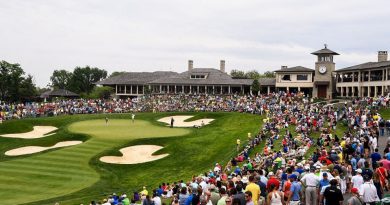