Exactly 50 years ago, Gary Player became the first non-American golfer to win the masters. Yesterday he got to watch his fellow South African become the first Masters champion to close up with 4 straight Birdies, and come out of nowhere for the win.

Charl Schwartzel turned pro at the age of 18 in 2002, and became the second youngest South African Golfer to qualify for the European Tour. Since then he has racked up 7 victories on the European tour, and 5 on the Sunshine tour, and can now add the Masters to his resume. In the final round, he played marked down a 66, coming back from a 4 stroke deficit to finish -14.

Adam Scott and Jason Day Tied for second with -12. Also of note, while he didn’t win, Tiger Woods did show that he still has potential. Front 9 of Sundays round he nailed a 5 under, 31. Bringing him up to a -10, and tied for the lead. Unfortunately his putting game was no where near what it used to be. He maintained his -10 to place tied for 4th (with Luke Donald & Geoff Ogivly). Quite an impressive score at Augusta.

Luke Donald had himself an excellent final hole. His first shot landed on the edge of a sand trap. Almost falling into the bunker while swinging, his shot managed to bounce onto the green and hit the flagstick, causing it to roll back off the green. Donald then chipped in his 3rd shot for a birdie and the tie for 4th place.

Rory McIlroy showed great promise as he sat atop the leader board after the first round, but imploded quickly within a couple holes, finishing tied for 15th with a -4 and Phil Mickelson finished tied for 27th with a -1.

It was a great Weekend for golf! I look forward to watching Charl Schwartzel, and see how this 27 year old picks up his game. Do you think Tiger Woods will continue to turn himself around and get back to being the greatest golfer, instead of just one of the best? 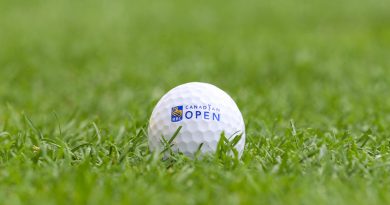 On The Range-RBC Canadian Open

Jason Day Gets The Win At The 2016 Players Championship!