This year you’ll have two new ways to keep your ear to the ground when it comes to PGA Tour coverage!

SiriusXM Announces “Comprehensive Coverage” Of 2011 Golf Season – The satellite radio outfit just released plans to have live play-by-play coverage of golf’s biggest tournaments in 2011, including all the events you’d expect: all four majors plus the Players Championship and the four events that comprise PGA Tour playoffs (Barclays, BMW, Deutsche Bank and The TOUR Championship). Sirius and XM listeners will enjoy hole-by-hole commentary and “expert analysis” on the golf-only PGA Tour Network channel.

Miked Golfers – The Tour’s given the go-ahead to let the Golf Channel clip microphones to players in PGA tourneys, according to Jack Graham, a producer with the channel. Getting permission was easy; finding players willing to wear the mike is another story. “I think it will work if we get some cooperation,” Graham said. “But it’s problematic. Some players will do it. Some won’t.”

The PGA Tour is running a bit behind with this idea, since the LPGA did it last year and other sport leagues like the National Football League and Major League Baseball have included wired players and managers in broadcasts for a few seasons now. This Caveman thinks it’ll be a great new way for fans to feel like their part of the action, but I’d suggest a seven-second delay to catch those four-letter words that a bad shot can bring out!

What do YOU think? Will golf fans tune in to radio coverage of PGA events? And will miked up PGA’rs be the next big thing on TV? 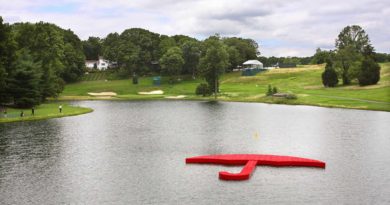 Feherty Is Leaving; Are There ANY Good Commentators Left?

One thought on “Microphones on PGA Players: Good Idea or Bad Idea?”