Its Masters week at Augusta, and the players are starting to gather on the course. The clock chimed 8 this morning as Tiger Woods strutted up to begin his practice round with Fred Couples. Tigers first shot flew far left (this was also his first public shot since he won the Australian Masters on November 15th). The crowd tried to stifle laughter as Woods asked for a new ball and took the mulligan. At least his next shot landed on the fairway.

The focus this week, whether we want to admit it or not, is going to be on Tiger Woods. He is the perhaps the biggest athlete in the world, and is returning to a sport that he has reigned over for more than a decade after a scandal of saber-toothed proportions.

According to my poll the Rockheads don’t think Tiger will take it. Who do you think will get to wear the green jacket?

Bonus: Do you know where the green jacket came from? Well, this is the way I remember it: 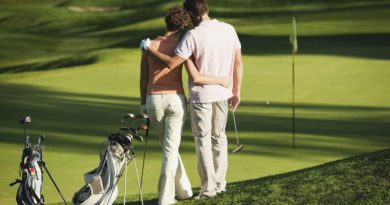 Hey Rock Heads the Odyssey Tens Putters are here! Read our blog to get features, specs, and reviews of the