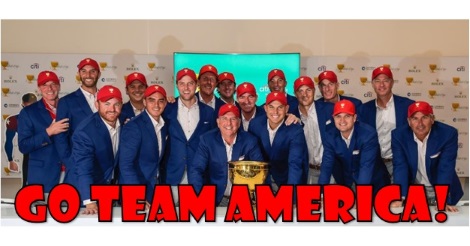 1. Team USA wins Presidents Cup in dramatic fashion. In a US versus the World tournament, Team United States, comprised of Jordan Spieth, Jimmy Walker, Rickie Fowler, Patrick Reed, Chris Kirk, Bill Haas, Bubba Watson, Zach Johnson, Dustin Johnson, Matt Kuchar, J.B. Holmes, and Phil Mickelson, defeated the Internationals by a score of 15.5 to 14.5. The final score was the closest it has been since 2003 when it ended in a tie. Although the Americans have won six straight Presidents Cup, this year’s close score and the fact that it was determined in the final round increased the dramatics.

2. Phil Mickelson proves his worth as Captain’s pick at The Presidents Cup. Although Mickelson finished the season without a top-10 finish in the final three months, US captain Jay Haas picked him to be a part of the team anyway. Although he did cause the US team a penalty on Friday when he used the wrong ball, his play was near perfect the rest of the weekend.

3. Matthew Fitzpatrick wins first pro title at British Masters. The 21-year-old Englishman has secured his spot as one of the top young golfers after shooting a 3-under 68 on Sunday. Fitzpatrick won the US Amateur Masters in 2013 and is currently playing his first full professional season. He shot five birdies in his final round and won the tournament by two strokes.

4. Tiger Woods wants to be an assistant at The Ryder Cup. Knowing he will likely not make the cut for the next Ryder Cup, Woods called assistant captains Fred Couples and Davis Love III to offer his help in the role of assistant captain. Although nothing is set in stone, it’s a very real possibility that Tiger can still be involved, even if he doesn’t make the team.