As we head into Ryder Cup week, I thought we should take a moment to relive those amazing matches from the past. These are MY favorite Ryder Cup moments, what are yours? Let me hear all about it Rock Heads!

The Cup came down to the final match between America’s then seven-time major winner Jack Nicklaus and 25-year-old Englishman Tony Jacklin, that year’s Open Champion, the first Brit in 18 years to hoist the Claret Jug. After Jacklin eagled the 17th, the match was all-square going down the last, with both men on the green in two. Nicklaus holed a clutch 4-foot par putt, but rather than asking Jacklin to putt, Nicklaus sportingly picked up his marker, halving the match and tying the Ryder Cup for the first time. He later said, “I felt like the US was going to retain the Cup either way. I didn’t think it was in the spirit of the game to make Jacklin have a chance to miss a two-footer to lose the match in front of his fans.” The Concession, as it came to be known, resulted in the first tie in Ryder Cup history, and endures as a symbol for exemplary sportsmanship generations later.

The US had not been beaten in 28 years, but the tide was turning. Sam Torrance holed the 22-footer on the 18th to beat Andy North in the seventh match finally winning the Cup back. Team Captain Jacklin drank champagne on the green and was lifted on to Torrance’s shoulders on the clubhouse roof. Torrance said, “We partied through the night and, in fact, for the next four days. I was meant to go home to London the day after the match but instead we drank six bottles of champagne and ended up partying for three more nights.”

Winning for the first time in 28 years was one thing, but the US had never been beaten on hoil soil. After their victory in 1985, a confident European team came to Muirfield Village and became the first European team to ever win in the US. The Americans tried to come back on Sunday after a disastrous Friday, but their fate was sealed when Ben Crenshaw – who broke his putter in frustration and putted the rest of the match with either his 1-iron or sand wedge – lost his match to Ireland’s Eamonn Darcy on the final hole. The real memory of this tournament? Jose Maria Olazabal doing a victory dance on the 18th green.

Anyone who watched this Ryder Cup will remember the incredibly tense finish. The rivalry was at an all-time high when the teams squared off at the Ocean Course on Kiawah Island for “The War on the Shore.” It all came down to the final hole of the final singles match between Bernhard Langer and Hale Irwin. Langer faced a 6-footer for par. Make it and he wins the hole, and Europe gets a tie to retain the Ryder Cup. Miss it and the Americans win. Langer missed and the Ryder Cup slipped away.

The Europeans opened big with a 10-6 lead amid a hostile, heckling audience. But America fought back until all they need was a halve from Justin Leonard in his match with Jose Maria Olazabal to win. Leonard had been down but came back by winning five of the final seven holes. It was all square on the 17th hole and his 45-foot birdie putt made many of the US team believed had sealed victory. Players, caddies and even some spectators invaded the green to celebrate. Olazabal still had his putt and was forced to wait until the area was cleared. Ultimately, the match went to the Americans, but they were heavily criticzed for the events on the 17th green.

It’s hard find a more emotional Ryder Cup. Just weeks after losing his wife, Heather, to cancer, Darren Clarke was greeted by a roaring crowd on his first tee in the final fourball match against Phil Mickelson and Chris DiMarco. Mickleson and DiMarco even joined the applause. Clarke blasted a 300-yard drive down the middle, birdied the first, and there wasn’t a dry eye in the house.

Talk about a comeback. The Americans were leading 10-5 coming into final Saturday match. Enter Ian Poulter. He reeled off five birdies on all five final holes to swing the match from a loss to a victory. More importantly, Poulter’s win swung the overall momentum to the Europeans who then staged largest comeback in team history on Sunday to win the most recent Ryder Cup. “You know what, these might be my majors. If they are, that’s fine. If this is it, I’m a happy man. I’ve got more pride and passion to give in the Ryder Cup than I feel to win a major,” said Poulter after the match 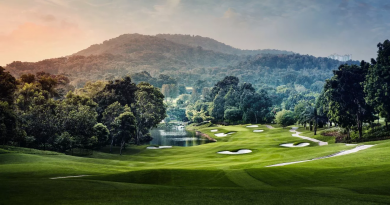 Have You Reached Your Golf Limit?

Who Will We Forgive First, Lebron Or Tiger?