“The world is your playground!” At least that’s what they tell us. We venture near and far, north and south, east and west to explore, relax… and play golf.

That’s right. Who are we fooling? Vacation without golf isn’t vacation at all. Well, I have explored the vast corners of the interwebs to find the world’s craziest, most exotic, and all around coolest golf courses.

A course in China named Mission Hills is adding a new course to its already gigantic collection, thanks in part to the resurrection of golf in the 2016 Olympics. The complex is made up of 22 courses, and the craziest one is yet to be built. The newest course consists of a replica Great Wall of China, a wind machine, and a water hazard made up of noodles and chopsticks. Although this may seem a little like a gimmick, the owners and builders of Mission Hills insists that the golf is real, just with a different set of obstacles.

La Jenny is a course in France that allows golfers to play in the nude. Yep, completely buck naked. The course is just six holes, and for some of the more modest of us, that may be just enough. Yet, La Jenny is known to be one of the only places in Europe that you can do such a thing.

Now you racing fans out there might get a kick out of this. Did you know there is a golf course in the middle of the Indianapolis Motor Speedway? Yup, titled The Brickyard Crossing you can play a full 18-holes in the middle of the racetrack where the celebrated Indy 500 is ran every May.

A most unusual golf course can be found in South Australia where there is no fuss about how green the grass is, because Coober Pedy Opal Fields Golf Club is placed directly in a desert, and the desert sand is fully embraced. The 18-hole, 72-par course creates a whole new game, one of only sand traps, large bounces, and long rolls. Similarly, the Firestone Overseas Golf Course in Liberia is made up of old rubber. The “greens” are even referred to as “browns.” This, however, seems fairly normal when you consider in South Africa there is a hole that can only be accessed on a helicopter. The 19th hole at the Legend Golf and Safari Resort is considered the toughest par-3 in the world, sitting 1312 feet above the hole on top of Hanglip Mountain.

On the other end of the earth, in Uummannaq, Greenland, a golf course made of ice will certainly test your skills. The course is on a glacier and the game is played with orange golf balls instead of white, so you don’t lose them in the snow. The holes on the greens are a little larger, and you’re going to be really cold, but other than that, it’s just another day on the golf course.

One of the craziest holes on any golf course happens to be in Idaho. The Coeur d’Alene Resort golf course was voted by both Golf Digest and Golf Magazine as one of the best places in the United States to play golf. The landscape itself will blow you away, but the famous 14th hole is the icing on the cake. The hole is a floating island that literally “floats” to a different distance each day. The island itself is just 15,000 square feet and you only have two attempts to land on the green. How do you get to the island, you ask? There is a shuttle boat that brings golfers back and forth to the green.

It seems that golf is so popular that they will build a course just about anywhere. There are courses in prisons, on a tarmac at an airport, on islands, and at old mines. There are courses surrounded by land mines, artifacts, and even one that preserved old dinosaur footprints. No matter the terrain, temperature, or obstacles in the way, golf demands to played and a golf course will prevail. 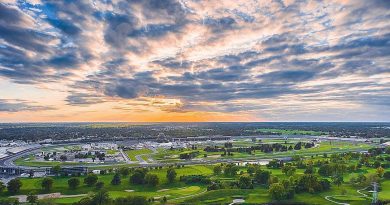 5 of the Most Unique Golf Courses in the World