It’s that time again. The final major of the 2012 season is this weekend- the PGA Championship at the Ocean Course on the Kiawah Island Resort in South Carolina. It’s my favorite time of the year next to Rockmas. It should be a mighty excitin’ game because the course is, how should I put it, insane. Let’s take a look at what’ll await the players, shall we?

The Ocean Course on Kiawah Island was voted by Gold Digest as the toughest course in the U.S. The 17th hole is thought to be the hardest in the country, if not the world. Seriously, take a look at that thing. It’s all water and bunkers. The course was designed by architect Peter Dye who is also known as The Monster Maker; The Mad Genius of Architecture; The Man Golfers Love to Hate; The Marquis de Sod; The Michelangelo of Modern Golf; The Dye-abolical Designer; The Most Interesting and Imaginative Course Architect in the World.

Sand, why did it have to be sand?

Some of the holes have what look to be sand traps all the way down fairways or behind the greens. The course is right on the beach and features so much sand that the PGA of America said all sandy areas have been declared ”through the green.” In caveman terms, that means no bunkers at Kiawah Island. The players can then can test the sand, take a practice swing, remove loose obstacles, and bury his club in the sand behind the ball – all the things you can’t do in a proper bunker without taking a two-point penalty.

Whoever decided to have the tournament in South Carolina in August has never been to the South. A typical day is 90° heat and 90% humidity. That’s just sadistic. I have it worse than you; I’ve lived through the Ice Age. An average day has 25mph winds. The wind off the ocean can change direction almost on a whim. Scattered thunderstorms and lightnin’ are predicted all weekend. There is almost no cover to protect the players from the lightnin’. On and a tornado funnel cloud almost touched down on the island last week. Sounds like fun.

The high heat combined with the high salinity of the water means that regular grass cannot be used on the course. Instead a tall, weedy grass called paspalum is used. The paspalum will grab the ball more and according the Tiger Woods is “very sticky” and will cause “very few bump-and-run shots”. The wedge game will become very important; the winds and the extreme length of the course (7,676 yards) will cause many to miss the greens. How they get out of it will be critical.

Yes, you read that right. Gators. Kiawah has a large population of American Alligators. I’ve dealt with dinos and these could go head-to-head with them. According to Golf Digest, these alligators love to sun themselves by the tee boxes and won’t move if you (A) hit them with a golf ball, (B) for lawn mowers, or (C) unless they’re hungry. According to the town’s website they can grow up to 11ft. long and if you encounter an aggressive alligator you should report it to the town hall. Providing of course you’re not in the hospital.

Who do you think will win Rock-heads? I think it will be the gators.

Check out these great links!

What’s in their bags 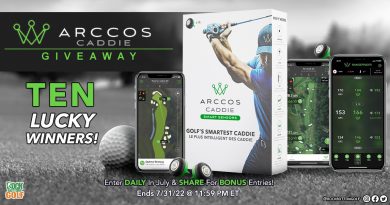