Just what is it about the Masters that gets the golf world so excited? Personally, this caveman marks his cave-calendar every year. For the past few weeks I’ve been eagerly crossin’ off the days, checkin’ out player profiles, and generally gearing up for the glory that is the Masters tournament. Even the good folks over at ESPN have a tough time pinpointin’ exactly what it is about the Masters that makes it so special. Maybe it’s that the Masters acts as a kind of signal for the coming of spring, it could be those beautiful green jackets, or maybe it’s the overall beauty of the course. No matter what the allure, there’s no denying that the Masters tournament is definitely one to watch for any true blue golf enthusiast.

So the question is: what does the Masters have in store for us this year? Obviously, all eyes are on the Tiger. After winning the Arnold Palmer Invitational last week, the golf world has been abuzz with hopes and speculations for Tiger’s much-anticipated comeback. So what exactly is it gonna take for the former phenom to reclaim his throne? Obviously, Tiger’s got some tough holes ahead that he’ll have to ply at par or better to win. As Farrell Evans, ESPN.com senior golf writer puts it, “On Sunday, all the contenders are going to play the par-5s well. With so many great players at the top of their games, Tiger is not going to have any margin for error.” Clearly the pressure is on for Tiger and only time will tell if he’ll be able to stand the heat.

Even though Tiger’s game has had its ups and downs, his latest victory has earned him a lot of respect. Most of the experts in the golfing community still have him pegged as a top contender for the Masters. Kevin Maguire of ESPN.com went so far as to label Tiger a staple in any fantasy team: “I’m not picking him to win, mind you, but I get the feeling it’s one of those situations where if I leave him off my fantasy team this week, I’ve got no shot to win.” Even so, Tiger’s got some stiff competition this time around. Players like Rory McIlroy, Hunter Mahan, Luke Donald, Phil Mickelson, and Bubba Watson are all poised to walk away with a win this weekend.

Not only is the competition going to be fierce, but the actual course will be quite the challenge as well. Augusta National is also home to some of the most beautiful and difficult holes in the nation. According to Farrell Evans, the third shot wedge into 15 is easily the most difficult wedge in major championship golf. The undulation on hole 10 is tricky too; if you don’t hit it with maximum distance, you’re stuck with a long iron shot in a tough green.

Between the hazards and the competition, this year’s Masters is sure to be one for the record books. Will Tiger take it all or fall short of our hopes? Will the number 1 spot switch hands again? Right now everything’s all speculation, but come this Sunday will reveal the underdogs and the top dogs of the PGA tour.

Let Me Hear You, Lefties!

Tour Officials Will Work Without Contracts 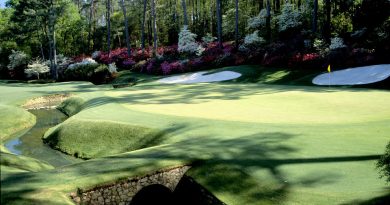