No PGA Golf this weekend:

But the PGA Tour did find the Top Ten shots of the year:

We’ve been counting them down and here they are: The Top Ten Shots of the Year! pic.twitter.com/t3QTPeYsYr — PGA TOUR (@PGATOUR) December 18, 2016

Happy 28th Birthday to one of the coolest golfers in the history of the game! 🎉💯⛳️ (📸: @walteriooss for Golf Digest)

Apparently he had quite the night:

When you roll up to @Catch_LA for your birthday dinner in the @RedBull Scenic Cruiser!! Squad!! From hanging with some of my best friends to pics with @cindycrawford and the @RyderCupUSA…Thanks for an epic night and a great way to ring in 28!! @Casamigos #HouseOfFriends @RedBull #GivesYouWings A photo posted by Rickie Fowler (@rickiefowler) on Dec 15, 2016 at 6:05pm PST

One that involved Cindy Crawford and the Ryder Cup:

Feherty gets in the Christmas spirit:

Tree decorated ✔ Stockings stuffed ✔ Presents wrapped ✔ David @Fehertwit is just about ready for Christmas… #AVeryFehertyChristmas, that is 😉 A photo posted by Golf Channel (@golfchannel) on Dec 14, 2016 at 8:57am PST

A fan made Bubba Claus feel extra special with these beautiful Christmas cookies:

Leaving today. Gonna miss this hammock haha….hmm Thinking If I can take it back with me in my suitcase 😆 A photo posted by Andrew ‘Beef’ Johnston (@beefgolf) on Dec 10, 2016 at 3:52am PST

Beef also signed up for a Beer, Beef and Birdie Triathalon with John Daly:

File this under “things you can’t make up.” @beefgolf might take part in a “birdie, beer, and beef triathlon” with @pga_johndaly. (PLEASE MAKE THIS HAPPEN 🙏)

No one knows what to do with the Olympic Golf Course in Rio:

Golf Channel’s top 50 courses you can play in the US includes this beauty in Colorado Springs:

It’s that time of year again! @matt_ginella counts down his top 50 golf courses in the U.S. that you can play. Kicking things off at No. 50: The East Course at The Broadmoor in Colorado Springs, CO.

Look back on some gorgeous photos from 2016:

And of course, some really ridiculous moments from the year, too:

Things got a little ridiculous in 2016 … pic.twitter.com/d7upY1VtDA 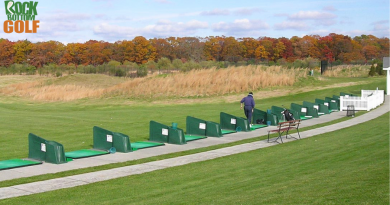