Finally healthy after major shoulder surgery, @patperezgolf is once again a PGA Tour winner! His second-career 🏆 comes at the #OHLCLASSIC.

That’s something to be thankful for:

Meanwhile on the ocean, The Justins – Rose and Timberlake – reeled in a huge wahoo:

While on the beaches of Dubai…

On the Champions Tour, history is made:

Bernhard Langer has won the #SchwabCup for the 3rd straight year.

And on the European Tour, Alex Noren moves up 100 spots in the rankings:

Alex Noren was 108th in the OWGR at the end of June. After winning the #NedbankGolfChallenge, he’s projected to move to No. 9. A photo posted by Golf Channel (@golfchannel) on Nov 13, 2016 at 9:58am PST

Coach Rusty shows off the trick shot of the week:

Come for the trick shot, stay for the slam dunk! Our Trick Shot of the Week is this @coach_rusty gem 👊

The producers are monkey-ing around behind the scenes at The Golf Channel:

So we hired a new producer today for @gcmorningdrive 🙊 A video posted by Golf Channel (@golfchannel) on Nov 12, 2016 at 7:06pm PST

Speaking of strange animals in Mexico:

There’s always that one group that slows you down… pic.twitter.com/Y6lTO8xfym

They don’t mess around at Mayakoba:

We don’t want this bunker as part of our weekend plans. pic.twitter.com/GPYYxx08n4

Not all the views were that scary this weekend:

A special performance for the champion. 🎺

THANK YOU VETERANS! I Honor & Support all the brave men & women who secure our freedom daily & to all who have served our great country! God Bless!🇺🇸 #HititHard #gripitandripit #America A photo posted by pga_johndaly (@pga_johndaly) on Nov 11, 2016 at 8:23am PST

Don’t let those winter blues get you down. The countdown to Augusta has started:

It’ll be here before you know it. ⛳ #masters #golf

Until next week at The RSM Classic: 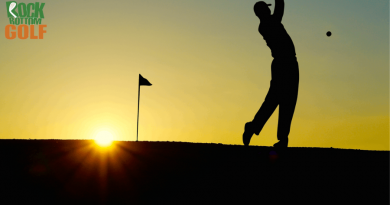 Tee It Up Recap-The Players Championship