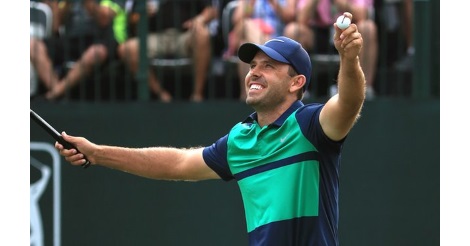 1. Charl Schwartzel holds on to win Valspar Open. The win looked to belong to Schwartzel. He was holding onto a three-stroke lead with six holes to play on Sunday before he bogeyed on the 16th hole and allowed Bill Haas to catch up. Schwartzel did just enough to force a playoff and made par on the first playoff hole to take the win. This was the South African’s second Tour victory. Watch as Schwartzel hits a 64 foot putt for birdie:

2. Australian Scott Hend gets a victory on the European Tour. Hend headed into Sunday with a six-shot lead over Piya Swangarunporn, but fell behind with five holes to play. Swangarunporn shot a course record 63 on the day, but Hend’s 68 was good enough to pull him in front and take home the trophy. The win at the True Thailand Classic Presented by Chang was Hend’s second European Tour victory. 3. Tiger Woods, Professional Golf Course Designer? Woods hasn’t competed professionally since August due to multiple back surgeries, however he’s not yet giving up on the game of golf. In 2014, Woods designed his first golf course in Mexico and loved the process enough to invest in a course in Texas that opened last month. And now it seems that Woods is at it again. Reports state that Woods was spotted scoping out land near Nashville this week. It is reported that if everything goes through with the land, that Woods will invest over $100 million into designing this new course.