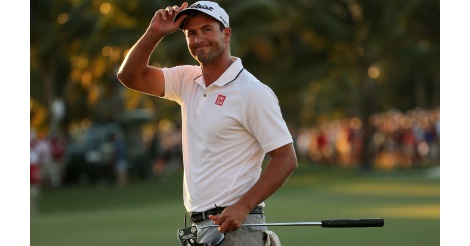 1. Adam Scott gets back-to-back wins. After a dry spell on the Tour since 2014, Adam Scott won his second tournament in two weeks with a stellar performance at the WGC-Cadillac Championship on Sunday. He now hasn’t finished lower than second place in his last three starts. Scott was six-shots behind with just 13 holes to play. He shot a final round 69 to defeat Bubba Watson by just one stroke.

2. Ha Na Jang gets her second victory in her last four starts at the 2016 HSBC Women’s Champions. The 23-year-old South Korean golfer finished at 19-under par and led for 54 holes. She won the Coates Golf Championship just last month in Florida. She had finished runner-up four times in her rookie season and has already reached her goal of winning two tournaments in 2016.

3. Ted Bishop is writing a book. The former PGA of America President tweeted out the cover and title of his tell-all book that is to be published later this year. Bishop was famously fired in 2014 after he referred to Ian Poulter as a “little girl.” The book will reportedly give an insider’s perspective to the hypocrisy of the golf game as well as details behind his firing.

Manuscript done. Stay tuned for the details regarding my book slated for release this summer! # Unfriended 38 pic.twitter.com/0S15mmE6xm

Golf #1’s Quick Turn Around – Good or Bad for the Sport?

How will Tiger Fare At the Masters?