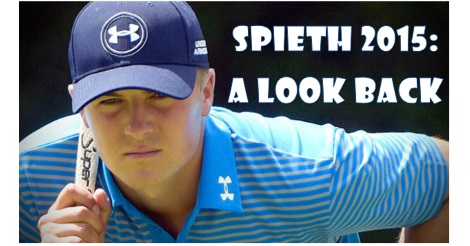 Jordan Spieth was recently named Player of the Year for 2015. Here is a deeper look at his young but very successful career.

In just the three years since Jordan Spieth turned pro, he has made quite the name for himself. In 2012, at just 19 years old, Spieth played in five PGA Tour events, made the cut in three, and finished in the top-25 in one. With several events under his belt, Spieth competed in 23 events in 2013, snagging his first PGA Tour win at The John Deere Classic in a sudden death victory over Zach Johnson and David Hearn. That year he pocketed over $3 million in winnings, finishing in the top-10 in nine events, and finished second in three. He became the first teenager to win a PGA Tour event in over 80 years, took home the Rookie of the Year title and finished 22nd in world golf rankings.

With his name officially on the map, Spieth started out 2014 by making waves at The Masters by co-leading with Bubba Watson for a stretch of the tournament. He finished second, becoming the youngest runner-up in Masters history. After the tournament, he shot up in the world rankings. As a top-ten golfer in the world, he was invited to be a part of the 2014 Ryder Cup Team.

As 2015 started, all eyes were on Spieth. In March, he started off with a win at The Valspar Texas Open, bumping him up to number four in the world. A month later, he made history at Augusta by becoming the second-youngest player to win The Masters, and also set a record for the most birdies at the tournament with 28. It was in April that Spieth started to become a household name and he jumped up to the second-best golfer in the world, just behind Rory McIlroy.

In June, Spieth won at The US Open, becoming just the sixth person ever to win both it and The Masters in the same calendar year. He then returned to the site of his first PGA Tour win, and shot his lowest round ever, a 61, at The John Deere Classic. In August, he finished second at The PGA Championship and for the first time in his career, held the top spot in the world rankings.

Just last month, Spieth capped off his historic season by winning the TOUR Championship and finished first in FedEx Cup points. He will finish off the season by participating in the 2015 Presidents Cup. All-in-all, Jordan Spieth won six Tour events this year, becoming just the sixth player since 1980 to win five or more Tour events in a single season, and the youngest player to do so since 1929. He also set a record for Tour winnings by pocketing over $12 million in 2015. He made 21 of 25 cuts, finished in the top-10 15 times, was named PGA Tour Player of the Year, won the Vardon Trophy, and Bryan Nelson’s Award winner.