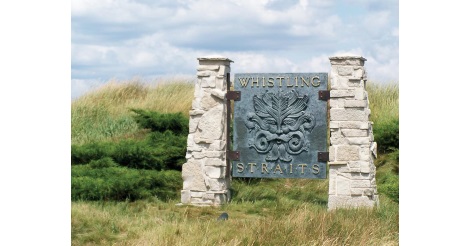 It’s here! Thursday marks the start of the final major of the year, the PGA Championship! The tournament this year will be played at the Straits Course at Whistling Straits in Sheboygan, Wisconsin. You might remember it from the 2004 and 2010 PGA Championship. You’ll definitely remember Dustin Johnson grounding his club in the bunker in 2010! Before we watch to see who will take home the Wanamaker Trophy, let’s take a look at Whistling Straits with a breakdown from the PGA! Plus click the link on the name of each hole to watch a flyover! 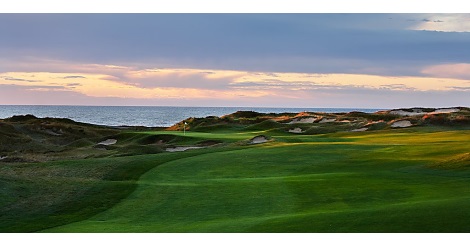 No. 1 – “Outward Bound” – 408 yards, Par 4
A well-struck center-of-the-fairway drive off the tee sets up a short-iron approach. A tee shot down the left side flirts with a series of bunkers and dunes, while a tee shot to the right creates a longer approach from the rough. Favor the right center of the green to avoid deep bunkers short left and long. 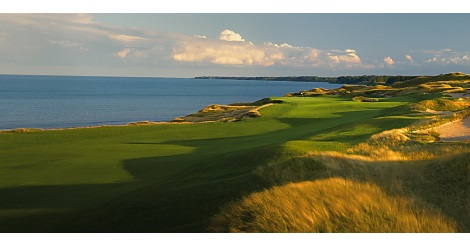 No. 2 – “Cross Country” – 593 yards, Par 5
A tee shot down the left side of the fairway is required on this hole to avoid a blind second shot. If electing to take an aggressive approach by going for this green in two, players will have to clear a deep pot bunker situated 35 yards short of the green. If played as a three-shot hole, the third shot plays slightly uphill to a narrow green guarded by deep bunkers to the left of the green and a large run-off swale to the right. 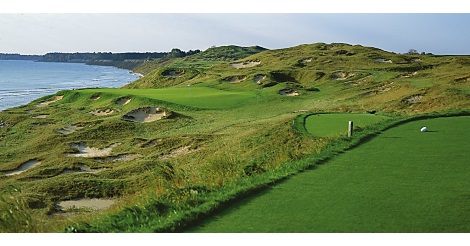 No. 3 – “O’Man” – 181 yards, Par 3
Favor the right side of this huge undulating green to avoid Lake Michigan and deep bunkers and dunes to the left. Any shot landing on the right-half of this green will move quickly left. Hole location will dramatically change club selection from short irons to mid irons, even when calm wind conditions exist. 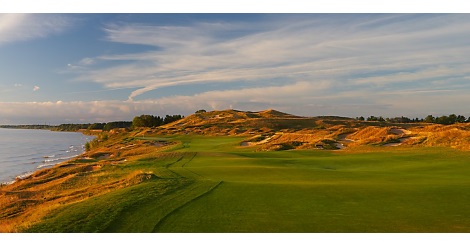 A long, visually intimidating par 4. Large mounding down the right side of the fairway tends to make the golfer want to favor the left, however most shots also bounce left toward bunkers and dunes that drop off quickly toward Lake Michigan. Approach shots require a mid to long iron into a slightly elevated green. The green hangs on the edge of Lake Michigan’s bluffs and will force players to favor the right-center portion of the green. 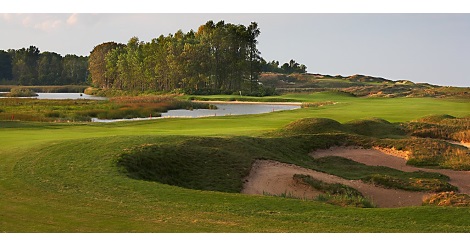 This will be a three-shot par 5 for most players. Water runs along both the left and right sides of the fairway. The landing area sets players up for a difficult decision for their second shot. Players that dare to hit their second shot to the green will be challenged by a long carry over water to a shallow green with no room for error short or left. A more conservative approach is to hit mid to long irons down the fairway to set up a better approach angle with the third shot, played with a short iron into this shallow green. 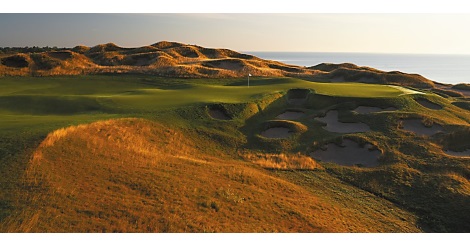 A short, dogleg right that may lead to a blind approach shot if the player strays right off the tee. Some of the braver and longer players may attempt to drive the green with a hard-driving cut shot, however a deep sand pot bunker guards the front of the green and must be avoided at all costs. Any shot short, right or long will leave a very difficult pitch to get up and down. The green is shallow, undulating, and difficult to read. 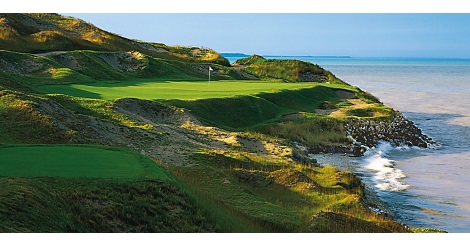 This striking par 3 hugs the Lake Michigan shoreline on the right. Beside the lake, this green is protected by a series of sand bunkers on the right and short. The left side is framed by a large hillside layered with sand bunkers. This long green will make club selection critical and has many subtle movements on it to challenge players’ putting. 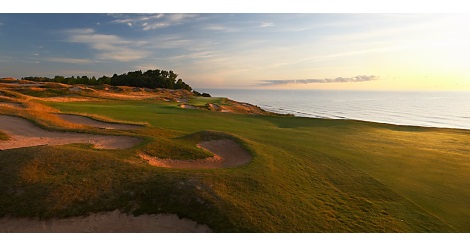 A blind landing area off the tee will challenge players to keep their tee shots left in order to avoid a severe drop-off, sand dunes, bunkers and Lake Michigan on the right. The second shot is played with the Great Lake as a backdrop. A long iron may be required to reach a very deep green guarded on the left by sand dunes and bunkers and right by deep bunkers with a fall off to the lake. The green is long and deep and will create difficult club selection choices to ensure playing to the right area on the green. 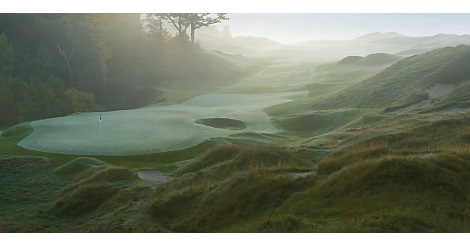 A tee shot down the left side will tend to kick right. If your tee shot is too far right, a large tree about 100 yards out may block your approach. Swirling wind conditions on this hole will dictate club selection from short to mid irons approaching this slightly hump-backed green. Seven Mile Creek and a series of narrow sand bunkers wind along the right side of the green, while the left side is protected by sand dunes and bunkers. 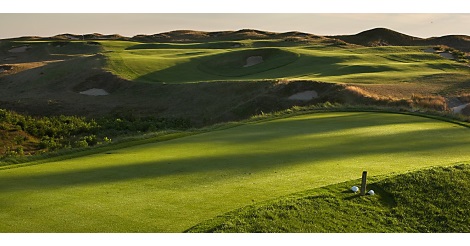 The aggressive play off the tee is a driver as close to the left side of the fairway edge as possible while avoiding a drop-off left. The deep bunker on the right side of the landing area will require a carry of at least 240 yards that sets up a wedge approach to this elevated green. Some players may elect to hit driver at the green in hopes for glory and will have to avoid small but deep sand bunkers short left while hitting into a steep hillside guarding the front of this green. This green has many subtle breaks that will fool quite a few players. 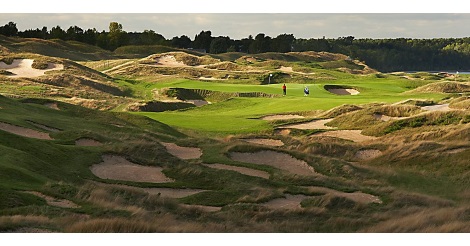 Playing more than 600 yards, this hole will challenge most players to hit driver, but anything straying right will be swallowed by sand dunes, bunkers and a drop-off to the right. The second shot must avoid a huge sand bunker on the left extending out to about 100 yards from the green. This “sand box” is more than 16 feet deep and would leave a player with a blind shot into the green. A conservative play leaves 110 to 130 yards for the approach shot. The approach shot plays to a small, elevated green with any shot landing on the front edge likely to roll back down well off the green and anything slight long likely to fall into a sand bunker guarding the back center of the green. 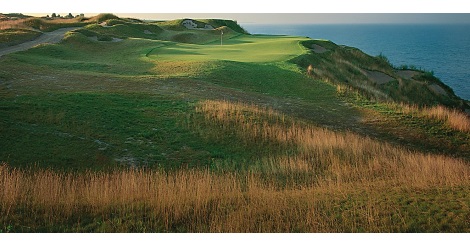 This may be the most difficult of all greens to manage. In addition, a hole location in the back right tier will get every player’s attention. This par 3 plays downhill to a very large, undulating green. Any shot landing in the middle of the green may reject long into deep bunkers. If missed short or right, the green drops off 40 feet to dunes and Lake Michigan. Getting the tee shot on the green is where the fun begins, as reading all of the breaks will take a very talented eye. 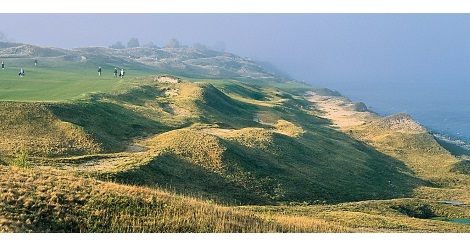 Favor the left side of the fairway off the tee on this short par 4. A tee shot that misses the fairway right will find sand dunes and awkward lies. A short approach shot is downhill to a narrow “cliff hanger” green next to Lake Michigan and protected by sand bunkers short right and left. An errant approach to the right will be lost to the steep bluffs over hanging the great lake. 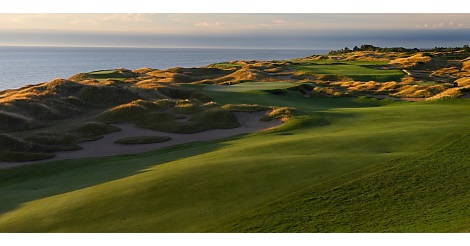 The long-iron or fairway-metal tee shot should favor the right side of the fairway guarded by an uninviting hillside with long fescue rough. Any tee shots to the left will most likely end up with a blind approach shot or in a sand bunker that guards the left side of the fairway. While the approach shots will be with short irons, deep sand bunkers guard the right side of this undulating green with more sand bunkers guarding the green long and left. 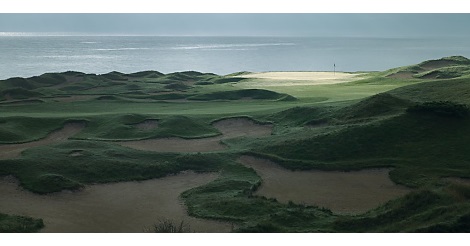 This hole begins what could arguably be the most difficult four finishing holes in Championship golf. A beautiful par 4 requiring raw power off the tee as well as an accurate long iron approach shot. Favor the left side of the fairway to avoid sunken sand dunes to the right. A long approach is played over sand dunes to a large undulating green. Sand bunkers protect the left side of the green. This green has many subtle breaks to it and will challenge every player. 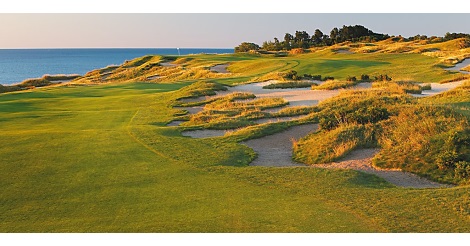 The shortest of the Straits’ par 5s will tempt most players to hit driver off the tee in order to give them a chance to hit this green in two. The center of the fairway is certainly a wise place to find since there are sand bunkers protecting the right and a drop-off toward Lake Michigan on the left. The long approach uphill has a forced carry over sand dunes and bunkers that will cause many players to bail out right. Those conservative players will be left with a short wedge into this elevated green with the sky and Lake Michigan as a backdrop. 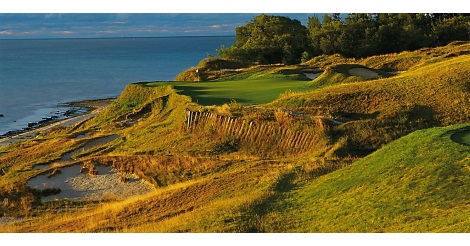 One of Pete Dye’s most intimidating par 3s … anywhere. The green is guarded left by monstrous sand dunes and bunkers that fall 20 feet below green level. If the bunker doesn’t capture the tee shot, Lake Michigan certainly will. A large elevated sand dune 40 yards short of the green will invite players toward the left side of the green, which is risky because of the drop-off toward the Great Lake. Actually, right over the bunker will usually be the safest play and most shots would find the green’s surface. Tee shots straying right will find sand dunes and bunkers on a steep hillside protecting the right side of the green. 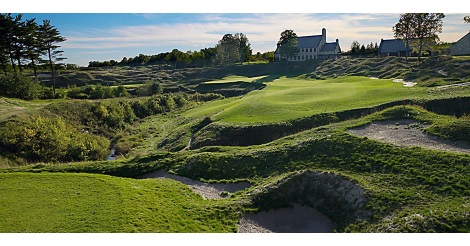 A challenging finishing hole where par will be an excellent target. A well-struck tee shot down the right side will surely find the fairway, but will leave a mid-to-long iron approach to the green. A more aggressive line off the tee to the left leaves a shorter approach but demands at least a 300-yard carry over sand dunes and bunkers. The downhill landing area must be considered to avoid a shot that travels too far and must stop short of sand dunes and a drop-off to Seven Mile Creek. Even though the approach is downhill, swirling winds surrounding the green complex force players to play an extra club to clear Seven Mile Creek, which guards the front side of this huge green. The green’s natural amphitheater feel will provide an exciting climax with thousands of spectators watching every shot.

Need to get your bearings? Take a look at the course map below! 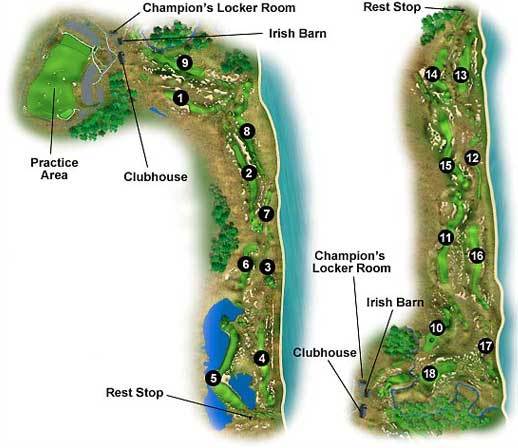