Each week the PGA Tour comes out with a list of Rookie Rankings and in the openings days of 2015, it seems golf fans have a plethora of new talent to keep an eye out for. Golfing today resonates with a younger crowd in a way that past generations have never seen. College and junior golf have developed young talent who have made the game “cool” in their own way– like Rickie Fowler’s outfits, or Rory McIlroy’s Twitter presence, or Jordan Spieth’s surge of success last year. We as golf fans have a lot to look forward to in terms of golf talent.

There are a total of 24 rookies on the PGA Tour this year. To be defined as a “Rookie” golfer you must play in at least 10 events or finish in the top 125 of the FedEx Cup Rankings. I have compiled a list of names–some of which you’ve already heard of and some who you may not have– of the golfers you need to watch out for in 2015.

Ranked number one heading into 2015 is Nick Taylor, the only rookie on the tour right now with a victory– The Sanderson Farms Championship. With the win, Taylor, just 26 years old, became the first Canadian to win on The PGA Tour since 2007. His victory came in November, just six months after he got married, and just a month after earning a spot on the tour. Although his win was his only top-ten finish, he finished in the top-25 five times in 2014 on the Web.com Tour.

The only other rookie to have a top-five finish so far this season is Justin Thomas, who finished T4 at the same event Taylor won. Thomas has people talking, however, after his dominance on the Web.com Tour. He had a win, second, third and 13 overall top-25 finishes, as well as owning the leading birdie average in his Web.com Tour career. Thomas was also the anchor of the 2013 Division I National Championship team at the University of Alabama. During his collegiate career, he held his own against the likes of Jordan Spieth and Patrick Reed, two young pros who have already made their mark on the PGA Tour. Currently, Taylor is ranked as number five in the Rookie Rankings.

Already finishing in the top ten of two events this year, Tony Finau is currently the second-ranked rookie on The PGA Tour in 2015 and currently leads with The Tour with 90 birdies. Finau turned pro at age 17, and now at age 25, he is turning heads with his long drive. This season he has twice hit the ball over 370 yards off the tee– he currently ranks 12th in distance off the tee. He had 14 top-25 finishes last year on the Web.com tour, five of those finishing in the top ten.

Mexican-American golfer, Carlos Ortiz, was named Player of the Year on the Web.com tour last year after three first-place finishes and two third-place finishes. So far on The PGA Tour, he has finished in the top ten once and the top-25 two times. He currently stands as the fourth-ranked Rookie on The PGA Tour this year.

In case you were wondering who the reigning rookie is, last year’s PGA Tour Rookie of the Year, Chesson Hadley, finished the season bringing in a respectable $1.7 million. His four top-ten finishes on The Tour made an impact and thus far this season he has finished in the top-25 of one of the four tournaments he has played in. He finished the season last year ranked 49th in FedEx Cup standings.

Of course, there are other big-name golfers to keep an eye on this season. Tiger Woods’ comeback. Can Rory keep rolling through 2015? Can Bubba repeat at The Masters? Will Billy Horschel take home another FedEx Cup?

All this golf talk is getting me excited for the spring! When does that pesky groundhog peek out to see his shadow? If he calls for six more weeks of winter, I’m moving south. 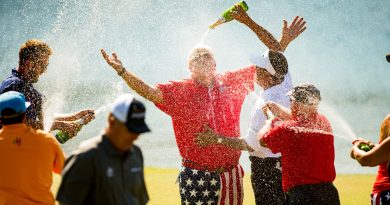