If you’ve been on the internet at all in the last year or two, you have seen memes. They’re the pictures with often funny white text superimposed on them. They’re extremely popular and apparently here to stay. However, I’ve seen too many examples of them being used incorrectly. It’s like drinking and putting folks, just don’t. So here’s Scratch’s primer to memes with some of my personal favorites. Enjoy Rock Heads!

This meme is uses a kids’ awkward yearbook photo to describe a time something started great but ended in embarrassment.

Use this one if you love science puns!

The perfect place for patronizing or sarcastic comments.

Not Sure If Fry

Use this for when your internal monologue is debating two choices.

For when something goes better than expected

What People Think I Do / What I Really Do

What the title says. It compares what people think about a job or activity to it’s not as glamorous reality.

Oh, I’m Sorry, I Thought This Was America

This one comes directly from the character of Randy Marsh on South Park. Use this one as a blanket excuse for your own action in response to criticism. We’ll leave it to you to find the clip from the episode.

The Most Interesting Man In The World

I’m sure by now, you’ve all seen the Dos Equis commercials about “The Most Interesting Man in the World”. If not, go to YouTube. They always end with  “I don’t always drink beer, but when I do, I prefer Dos Equis” and this meme is just a take off of that. Golfers seem to love this meme and it has even inspired a parody with our favorite Spaniard that we here at the Cave LOVE. 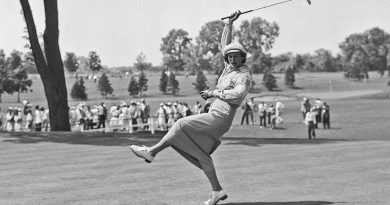 The Northern Trust Open: What You Need To Know