With a final round of 68, Webb Simpson won the US Open on Sunday. After competing against some true champions like Tiger Woods, Rory McIlroy, and Phil Mickelson just to name a few, Simpson had earned his well-deserved moment of victory. Yet when he took center stage to receive his hard-earned trophy, all eyes weren’t on the golf world’s latest champion; they were glued to the drunken fan loudly whooping in the middle of the awards ceremony.

Sadly, this incident wasn’t exactly isolated at the US Open this year. Fans were yellin’ and jeering throughout the day. With every tee-off, the crowd would erupt into screams. The pop culture references were in more full swing than the actual sport. With calls of “Get in the hole” and “Yabba-dabba-doo!” it seems like the “gentlemen’s game” devolved into a Happy Gilmore scene this past Sunday.

We’ve got this theory over at Rock Bottom golf when it comes to American sports: if yer sport has a mascot, then it’s okay for the sidelines to be a little wild. Think about it. Football, baseball, hockey, and soccer – all of ’em have mascots. Tennis? No mascot, no rowdy crowds. The same should go for golf.

So what exactly can officials do to curb the rowdy crowds?

Well, the most drastic thing they could do would be to cease sellin’ alcohol and stop acceptin’ the alcohol industry from sponsoring PGA events, or USGA in this case. Then again, that’s about as likely to happen as this caveman givin’ up golf. Michelob Ultra just happens to the “Official Beer” of the PGA Tour. By sponsorin’ the Tour, Michelob gets to have its wares sold at Tour events. How much exactly does it cost to sponsor a Tour event? Let’s just say that’s a multi-million dollar question. So given the millions that the professional golf gets from alcohol sponsors and the thousands that they make by sellin’ beer at events, it looks like when it comes to crowd conduct, the pocketbook is more important than the rule book.

Other than lettin’ the beer tap run dry, there are other options that professional golf officials might consider to keep the rambunctious crowds in check. There are already gallery marshals in place to help reduce distractions that might affect player concentration. However, official guidelines instruct marshals not to eject spectators who might be causing trouble. I dunno about you, but this caveman thinks that – in light of the shameful displays at the US Open – perhaps the higherups might consider extendin’ the powers of the gallery marshals to include removin’ distracting fans from the course. Considering how expensive golf event tickets run (tickets for the Masters tournament can cost upwards of $1,500 and can go as high as $12,000 for one ticket!), the threat of bein’ kicked out for disorderly conduct is sure to hit a lot of golfers hard. It’ll only take a couple of people losing hundreds (or even thousands) of dollars because they couldn’t control themselves to send a message to the golfin’ community. This is supposed to be a gentlemen’s sport afterall, right? Maybe it’s about time we start actin’ like it.

But what do you think, Rockheads? How would you prevent this weekend’s fan behavior from happenin’ again? Or is this kind of unruliness just a sign that golf is gettin’ to be more popular? Would preventin’ fan fun prevent the sport’s rising popularity or should the golfin’ officials crack down before it’s too late for golf’s reputation? As always, leave yer thoughts in the comment section! 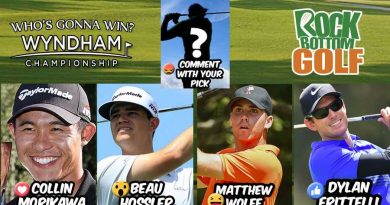 One thought on “Out of Control Fans at the US Open”