Since its establishment in 1933, Augusta National has been hailed as one of the nation’s premier golf clubs. This extremely selective club boasts members like Bill Gates, Warren Buffett, and Harold Poling. In the world of golf clubs, this place is the crème-de-la-crème, no doubt about it. Built on long-standing traditions and shrouded in exclusivity, getting membership with Augusta National tells the world that you’ve made it.

But throughout the history of this illustrious club, Augusta has made it difficult for certain people to don their famous green membership jacket. And by “certain people,” I mean anyone who’s not a white man. Augusta didn’t have a black member until 1990, when it extended an invitation to Gannet Co. (GCI) television President Ron Townsend who still belongs to this day. While 1990 may seem like ages ago, let’s put this in perspective: the world saw a man walk on the moon two decades before Augusta saw a non-white man in their signature green jacket.

Now Augusta faces another membership quandary: should they allow women to become members at their historically all-boys club? While this controversy has been stirring up since 2002 when Martha Burk, chairwoman of the Washington-based National Council of Women’s Organizations, contended that hosting the Masters Tournament at a male-only club constituted sexism, this year Augusta is faced with a real do-or-die moment regarding female membership in the form of Virginia Rometty, the newly appointed CEO of IBM.

As per tradition, membership at Augusta is offered to the CEO of IBM, one of three Masters sponsors. As the newly appointed CEO, Rometty should be donning that custom-tailored jacket in no-time; but as a woman, the company hesitates to start taking her measurements. “They have a dilemma on many levels,” said Marcia Chambers, senior research scholar in law and journalist in residence at Yale University Law School. “If there’s been a tradition of certain CEOs, then they should look at this new CEO in the same way. The only thing that makes her any different is her gender.”

As a private club, Augusta has every right to set its own rules and pick and choose their membership. However, whether or not they will pick Rometty or choose to exclude her based on her gender remains to be seen. And so far, they aren’t very forthcoming with the details of their internal debate; every member asked to speak on the decision has declined to comment.

In this caveman’s opinion, the fact that we’re even having this discussion in 2012 seems ridiculous. While I may remember the days of clubbin’ ladies over the head and draggin’ ’em off to my cave, it doesn’t mean I’m proud of that past and it certainly doesn’t mean such traditions of subjugating women should continue into the 21st century. Perhaps what’s most disturbing about this debate is the overwhelming male reaction in favor of keeping Rometty out of the clubhouse. Comments like “keep the women off the golf course and in the kitchen” abound on comment boards regarding this issue. At least in this caveman’s opinion, women belong wherever they please – kitchen, clubhouse, or the CEO’s corner office. While Augusta legally has the right to exclude Rometty (and any potential member, for that matter), the facts are: if the new CEO of IBM was a man instead of a woman, there would be no hesitation. He would become a member without question and without national debate. At this point, even if Rometty becomes a member, the very fact that her potential membership was debated in the first place, in this caveman’s opinion, counts as a stroke against Augusta’s proverbial scorecard. Had they quietly and without a fuss accepted her into their ranks, Augusta would have taken a huge step towards putting to rest the idea that “golf” stands for “Gentlemen Only, Ladies Forbidden.” Instead of standing as an institution in favor of progress and equality, Augusta has opted to remain the stodgy boys-club steeped in scotch and the acrid smell of misogyny. Personally, I prefer the aroma of half-decayed mastodon to that stench, though both are equally out-dated.

But this is just one caveman’s opinion. Let’s hear from some of the other cavemen and cavewomen out there. What do you think about Augusta’s dilemma? Should Rometty be allowed to sport the green of Augusta’s membership jacket, or should she stick to the greens of her local course? Leave your thoughts in the comment section! 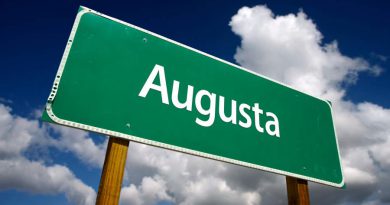 What To Expect At The Masters 2022

13 thoughts on “Augusta National Struggles to Answer the Woman Question”