Tiger Woods is revving to appear in this week’s PGA Tour event, the Honda Classic 2012 Tournament. Starting at last week’s World Golf Championships-Accenture Match Play Championship, Woods has been gearing up for a stretch of three consecutive weeks on TOUR. Given his less than stellar performance at the Match Play Championship – the tournament saw him sink near the bottom of the PGA Tour in strokes gained putting (he missed three putts inside of 10 feet on the back nine) – it’s clear that Tiger just isn’t the dominant player he once was. Though he started the final round just four shots from the lead, his Sunday struggles at the Match Play Championship weren’t pretty; he shot a 3-over 75 and dropped into a tie for 15th place. That being said, perhaps this full docket of Tour events is an indication that Tiger hasn’t cooled his engine just yet and is eager to shift his game into high gear.

Adding the Honda Classic to his schedule is a bit of an anomaly for Woods; he has never played the event as a pro. His only appearance at the Honda Classic was way back in ’93 when a fresh-faced, 17-year-old Tiger took to the Weston Hills course as an amateur (and failed to make the cut).

“I heard great things about the Honda Classic,” Woods said in a release. “Now that I live here I want to play whenever possible. (Jack Nicklaus’) involvement in the tournament and the benefits to the local community are also important.”

Tiger isn’t the only one excited for his appearance at the Honda Classic. Executive Director Ken Kennerly is “thrilled” to have the champion play a part in the tournament. “We have worked hard for five years to make this one of the premier events on the PGA TOUR,” said Kennerly. “This is a testament to where the tournament has come, and a testament to Honda’s 31 years as the longest-standing sponsor on the PGA TOUR.”

The competition for the title will be stiff this year. Woods will take to the field along with reigning Masters champion Charl Schwartzel, reigning U.S. champion Rory McIlroy, reigning British Open champ Darren Clarke, and English star Lee Westwood (currently No. 2 in the Official World Golf Ranking). With competition and a course like this one, clearly Tiger is ready to prove that he hasn’t lost the old luster just yet. But the question is, will Tiger come back with a bang, or fizzle out in a whimper? This caveman loves a good comeback story, but I’m not sure Tiger fans can stand another heartbreaker like the Match Play Championship. Hopefully the fist-pumping phenomenon will prove that he’s more than up to the challenge. 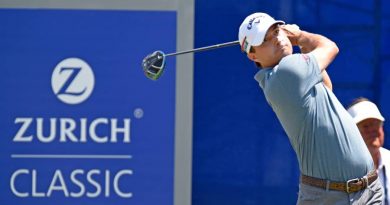