In February, the Temple Terrace Golf & Country Club of Temple Terrace Florida will play host to the annual United States Professional Hickory Golf Championship. Hickory Golf, a variant on the traditional sport we Rockheads know and love, differs from traditional golf in that Hickory golf is played with hickory shafted golf clubs.

Hickory golfers are divided into two groups, the pre-1900s group and the pre-1935 group. The members of the former group play Hickory golf with the old Gutta-Percha ball, or its equivalent, and acceptable clubs are limited to those produced before 1900 (or authorized reproductions). The pre-1935 group plays with modern balls; however, play is limited to clubs manufactured before 1935 (or authorized reproductions).

The United States Professional Hickory Golf Championship (USPHGC for brevity’s sake) allows spectators and players alike to “transport back in time to a golden era where legends such as Harry Vardon, James Braid, and J.H. Taylor were the old masters, and the superstars of the fairways were Walter Hagen, Jim Barnes, and Gene Sarazen.” The United States Professional Hickory Golf Championship is the only hickory shaft golf event in America that is open strictly to golf professionals only. Just as in 1925, the tournament has a $5,000.00 prize fund with a $100 entry fee. Today’s players also compete for the John Shippen Cup, named after America’s first professional golfer.

The Temple Terrace Golf & Country Club in Temple Terrace, FL was the site of the $5,000 Florida Open of 1925, won by Leo Diegel and featuring some of the best golfers of the era. The USPHGC was started by hickory golf buff Mike Stevens in an effort to celebrate and commemorate that event in golf history. A slideshow of last year’s event can be viewed through GolfDigest.com.

Watching a round of Hickory golf in the modern era reminds today’s players of how much the game has changed even in just the past hundred years. Heck, this caveman can remember putting with my fellow troglodyte’s back in the… well… let’s just say it was a long time ago. Hope you Rockheads enjoyed this little history lesson from the Cave! 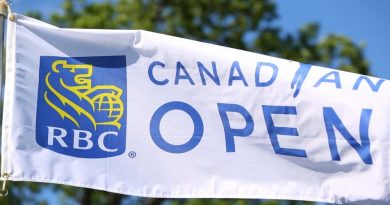 A Quick Look at the RBC Canadian Open