The 6th week of Caveman Golf Trivia has come to a close. Thank you all for playing! For those Rock Heads who are scorin’ at home, here are all the questions and their answers:

When Was the last time Golf was played in the olympics?

When was the first time Golf was played in the Olympics?
Answer:1900
Facebook: Adarsh Vakharia, Tim ARnold, Blake Hagwood
Twitter:

Who won 8 events his debute year on the PGA Tour, 5 years before he won the Masters?
Answer: Horton Smith
Facebook:
Twitter:

Which “Son” had four US Open Wins, including 3 in a row?
Answer: Willie Anderson
Facebook: Adarsh Vakharia
Twitter:

What is the theme song for The Masters Tournament?
Answer: “Augusta” by Dave Loggins
Facebook: Adarsh Vakharia, Michael Novick
Twitter:

How Many Americans have Olympic Golf Medals for Golf?
Answer: 12, Charles Sands and Margaret Ives Abbott in 1900 and the 10 members of the Mens team in 1904.
Facebook: Byron Balint and Adarsh Vakharia
Twitter:

Who was the first person from Great Britain to win The Masters?
Answer: Sandy Lyle
Facebook: Michael Pastrick, Adarsh Vakharia

Who is the only Woman with a Gold Medal in Golf?
Answer: Margaret Ives Abbott
Facebook:
Twitter:

Who was the second person in history to win $1 million in his career?
Answer: Billy Casper
Facebook: Adarsh Vakharia, Mark D. Carter
Twitter:

Of All the players to ever win a Major Title, Who comes first Alphabetically?
Answer: Tommy Aaron
Facebook: Blake Hagwood
Twitter:

Three Golfers won 6 of the 10 US Opens in the 90’s. Who were they?
Answer: Payne Steward, Ernie Els, Lee Janzen
Facebook: Raymond Sarlatte, Blake Hagwood
Twitter:

Who won the most LPGA tournaments in the 90’s?
Answer: Annika Sorenstam with 18
Facebook: Blake Hagwood, Susan Bettenbrok Appler
Twitter:

Who was the highest money earner on the PGa tour in the 90’s?
Answer: Davis love III earned $11.6 million plus, and Tiger earned just over $11.3 Million
Facebook: Blake Hagwood
Twitter:

Congrats to jpalopoli(twitter) and Blake Hagwood(Facebook) for winning the trivia contests this week. Adarsh Vakharia Scored the Most points, but since he won last week was ineligible until next month, but Keep up the good Work Adarsh! Remember you get 5 points for having the first correct answer, but can also gain points just by having the correct answer! Weekly winners receive $10 gift certificates to RockBottomGolf.com.

Also Susanne Cyr took this weeks High Score on my golfin’ game! Also Earning her a $10 Gift Certificate to the Cave!

The Top 8 Halloween Costumes For Golfers! 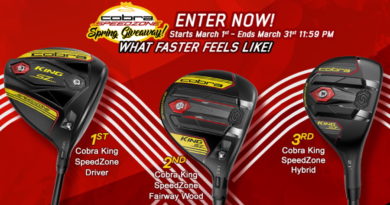